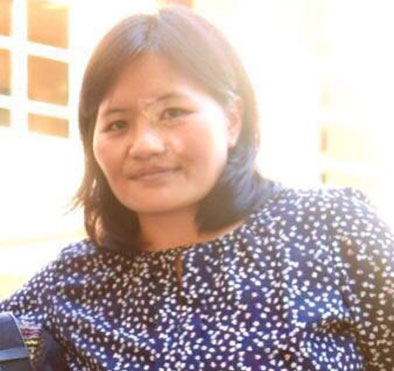 Staff Reporter
ITANAGAR, Apr 4: Papum Pare district disaster management officer (DDMO), Tsering Youngzom, reportedly died by suicide on Friday night at her residence in ESS Sector here. She was 38.
Police say that, prima facie, it appears that Youngzom committed suicide under tremendous job pressure.
“As per the preliminary investigation, it was a case of suicide without foul play,” Capital SP Tumme Amo said.
The SP disclosed that Youngzom’s family members had seen her writing a resignation letter late Friday night, but she left the letter incomplete.
“According to her driver, she had asked him to rest from today (Saturday) onwards as they had become too exhausted because of the Covid-19-related duties, and she had asked the driver to come late today,” the SP said.
“As per our initial investigation, it is a suicide case without any foul play. She was sleeping with her nine-year-old son in her room. The son slept on the bed while she slept on the floor, due to fear of infection,” Amo said.
The SP said Youngzom’s husband stays in Kalaktang, in West Kameng, and she was living with her mother-in-law and eight others at her residence in Itanagar.
“Her son got up today, unlocked the door, and asked other members to look for his mother. When they searched, they found that the bathroom was locked, and they found her body there,” the SP informed.
He said the TRIHMS chief medical officer has been asked to prepare the postmortem report.
The capital police have arranged an ambulance through UTellUs and, with cooperation from the Assam police, have arranged for safe passage of the body to Kalaktang, the SP said.
Meanwhile, the Papum Pare district administration has deeply mourned Youngzom’s untimely demise.
The administrative officers in Yupia observed a minute’s silence in the deputy commissioner’s office as a mark of respect to the departed.
Offering condolences to the bereaved family, the administration prayed for strength for the bereaved family in this hour of grief.