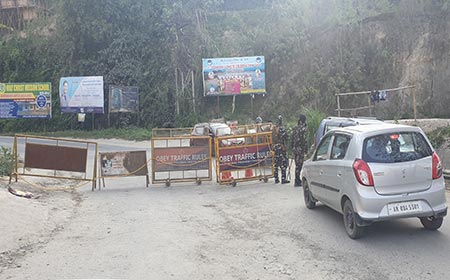 ITANAGAR, Apr 5: Director General of Police (DGP) RP Upadhyaya has said that the police will take strong action against those who violate the lockdown order.
Speaking to the media here on Sunday, he said the police have collected fines totalling around Rs 3,93,350 from violators of the lockdown rule in the state.
“Since the imposition of lockdown, the police have arrested 233 violators, and 378 vehicles have been seized across the state. We have also registered 72 cases for major violations,” the DGP said.
Expressing displeasure over so many reports of violation of the lockdown being received from various parts of the state, Upadhyaya appealed to the people to cooperate with the police in implementing the lockdown order.
“Everyone is equally responsible to follow the rule of law, abide by the guidelines of the health department and the administration, and listen to the dos and don’ts for the safely of the masses as well as their own safety,” he added.
The DGP said he has instructed the superintendents of police in all the districts to enforce the lockdown in an effective manner, particularly at the 38 permanent and 50 temporary check gates across the state, to stop inter-district as well as interstate movement of people.
Upadhyaya added that the police have identified around 23 persons from Arunachal who participated in the Tablighi Jamaat’s congregation in New Delhi’s Nizamuddin.
“We have properly screened them and samples were tested, out of which only one tested positive, from Lohit. All remaining persons are under strict quarantine in Lohit, Namsai and the capital complex,” he said.