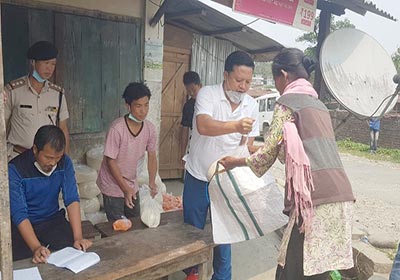 ITANAGAR, Apr 7: Kharsang-based Scale Industries Association donated Rs 1,55,000 to the chief minister’s relief fund (CMRF) and Rs 1 lakh to the Kharsang administration in Changlang district on Tuesday.
The cheques were handed over to Kharsang SDO RK Rai through a representative.
The Tangsa Baptist Church Association’s mission centre in Nongtham donated Rs 1,55,000 to the Changlang district administration on 6 April.
The cheque was handed over to Deputy Commissioner RK Sharma.
The church association also prayed for the wellbeing of all those who are engaged in the fight against Covid-19.

In the state capital, NGO Being Arunachalee (BA) contributed Rs 2 lakhs to the CMRF.
BA members, led by its chairman Ringu Kuku, on Tuesday handed over the cheque to an official of the chief minister’s office.
Earlier, the BA had distributed edibles to police, daily wage earners, medical staff and villagers in Doimukh, Yupia and Hollongi.
The villagers of Morshing in Kalaktang circle of West Kameng district also on Tuesday contributed Rs 10,000 from their village council fund to the CMRF.
The amount was deposited in the SBI account of the CMRF.
Earlier, on 4 April, youth organization Morshing Yamlang Zaamin had distributed rice, oil and other essential items to the villagers and to the migrant workers currently residing in the village.
“The villagers also sent prayer for early end of the Covid-19 pandemic and requested all to follow the government guidelines properly,” informed HGB Netan Dorjee and former ASM TT Bapu, who are supervising the fight against Covid-19 in the village.

Thrizino-Buragaon MLA Kumsi Sidisow distributed 10 kgs of rice, 2 kgs of flour and 1 kg of pulses to about 500 daily-wage earning families from Bhalukpong and Tippi in West Kameng district.
He also sent 200 bags of rice to Thrizino block to be distributed among 18 villages, besides another 100 bags of rice for Singchung block.
Former IMC councillor Donik Tayu donated rations to the needy residents, including daily wage earners, in Vivek Vihar and nearby areas in Itanagar on Tuesday. Each ration package contained 10 kgs of rice, besides potatoes and pulses.