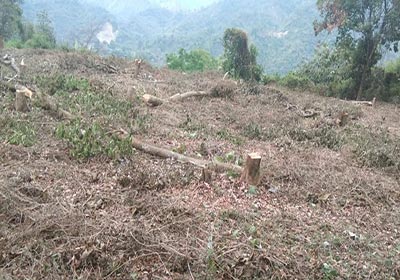 Staff Reporter
RONO HILLS, Apr 10: Jhum cultivation is reportedly being carried out on a plot of land belonging to Rajiv Gandhi University (RGU) here in Papum Pare district.
The plot, which is located outside the university’s present boundary wall, was earlier a disputed one. However, after it conducted a survey involving the local residents, the Papum Pare district administration had identified it as RGU’s plot. The dispute was settled and the land management secretary was informed about it in September 2019.
However, on Friday, some people started clearing the forest to start jhum cultivation in the area.
Speaking to this daily, an RGU official said the university will write to the district administration soon to inform about the development.
“We had already initiated the file process to construct the wall after the state government had cleared the old dispute and identified this plot as the property of RGU,” the official said.