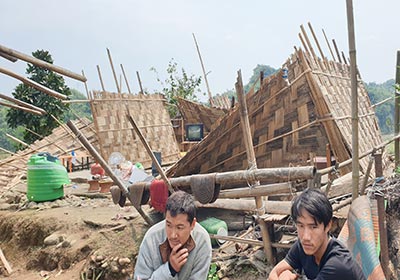 ITANAGAR, Apr 10: The severe storm which hit the capital complex on Thursday night damaged at least four houses.
Speaking to this daily, Capital Complex DC Komkar Dulom informed that four houses have been completely damaged, and the administration is awaiting further reports.
He said the DDMO and the magistrate are visiting the storm-hit areas to assess the losses.
Meanwhile, a resident of Sinyik Colony here claimed that six houses were damaged in the area.
“These houses have been completely damaged and the residents have become homeless. Because of the lockdown, now the people cannot even carry out repair work. We appeal to the state government to help these families,” he said.
In Jullang, the house of one Taring Paul, a student of the Himalayan University, was completely damaged. Speaking to the media, he informed that his books and other household items have all been damaged.