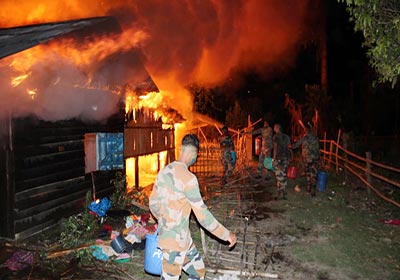 NAMSAI, Apr 10: Five rented houses along with labourers’ rooms belonging to one Nang Choi Rupa Namchum were reduced to ashes in a devastating fire that occurred in Gunanagar here on Thursday evening, rendering the families homeless.
According to sources, the fire, which broke out at around 7:30 pm, spread rapidly, giving no time to the families
to save their belongings.
While there has been massive loss of properties, no casualty has been reported.
The Indian Army based in Chongkham, along with the police and public managed to stop the fire from spreading further. Fire tenders from Namsai reached the spot later.
The cause of the fire is yet to be ascertained.