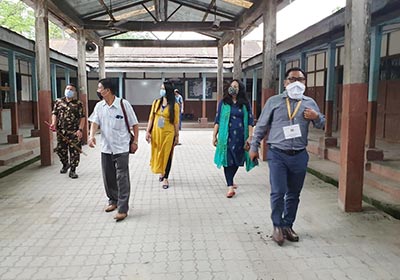 Staff Reporter
NAHARLAGUN, Apr 15: The government higher secondary school in Model village (Kanker Nallah) and DN Government College has been designated as relief camps for the stranded migrant labourers by the capital administration.
Naharlagun EAC Ashok Tajo while informing this here on Wednesday, urged the
migrant labourers not to go back to their home state during the lockdown period.
“This camp is being set up for those labourers who have either been abandoned by the employers or are with no job. We appeal all such labourers to stay back till the end of lockdown period. The administration will support them in every possible way,” he said.
The EAC informed that all the basic facilities would be provided in the camp, including food. The relief camp is getting ready and will start operation in all probability from Friday onwards, he said.
Meanwhile, Deputy Commissioner Komkar Dulom informed that first relief camp was established in DN Government College, Itanagar.
“There were few labourers but after some days, the employers took them back. The camp is still ready and we can accommodate labourers if need arises,” said Dulom.
He also said the administration has distributed ration items to many during the lockdown period.
“We have identified many such families and have provided ration items. It is also heartening to see many NGOs and even individuals coming out in large number to extend help to the poor and needy,” he said.