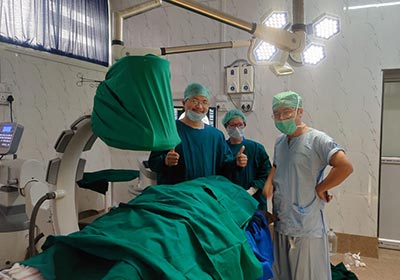 Staff Reporter
ITANAGAR, Apr 15: Amid the nationwide lockdown, a 53-year-old male suffering from Type-2 diabetes mellitus and hypertension successfully underwent a dual chamber permanent pacemaker implantation on 15 April despite the lack of a cath lab in the state.
The pacemaker had to be brought in personally here in the state by an executive of the manufacturing company, Biotronik from Guwahati in Assam due to inter-state travel restrictions.
Hospital authorities informed that the patient was referred
to the Rama Krishna Mission Hospital (RKMH) here from the Niba Hospital in Papu Nallah on 9 April with complaints of sudden onset of giddiness.
The patient was found to have 2:1 AV Block (Mobitz Type II) with heart rate of 36-40 beats per minute and was shifted to the operation theatre as soon as he was brought in and developed complete heart block.
Consultant cardiologist of RKMH, Dr Romar Dabu carried out an emergency temporary pacemaker implantation at around 9.30 PM on the same day of admission followed by the permanent implantation on Wednesday.
There were no complications at the OT and the patient is said to be stable post procedure.
“It was a herculean task to arrange the dual chamber pace maker from Assam in this lockdown with strict borders. However, with smooth cooperation from the administration and police, the pacemaker could be brought in and a person’s life was saved,” hospital authorities said.
It is to be noted that such procedures mandatorily require a cath lab but the state does not have one in any of the hospitals and hospitals have to make do in the OTs to help out patients who require immediate treatment or cannot afford the costs outside.
“Setting up of a cath lab would do immense good for such cardiac patients. At present the TRIHMS has only two cardiologists and the RKMH has one. The procedure can be done at half the cost here in the state of what it is costs in Guwahati or other metropolises,” a doctor said.