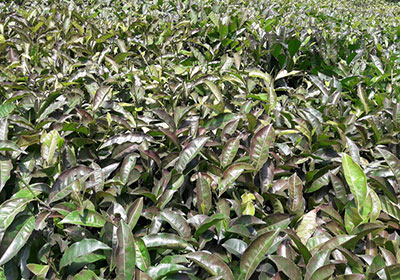 [ Prafulla Kaman ]
RUKSIN, Apr 26: Tea planters in the Siang valley, including East Siang and Lower Siang districts in Arunachal and Jonai in Assam, who have been suffering heavy losses due to the Covid-19 lockdown, are now hit by a wave of pest attack.
Swarms of a tiny insect called the red spider mite (Oligonychus coffeae) have been creating havoc in the tea gardens of the region for a month now, causing major damage to the crops during the peak season.
Pest attacks have been reported from Donyi Polo Tea Estate and other tea gardens in Oyan, Kemi-Jelom, Ruksin, Nari-Seren, Telam and Dekapam, and adjoining areas in Assam.
“Unavailability of pesticides due to the prevailing situation in the country is causing problem to the farmers in controlling the pest attack,” said Diite Tea Estate (Linka) manager Kaling Moyong.
“Earlier, we used to manage red spider mites using organic preparation or recommended chemical pesticides. But due to the prevailing situation, the farmers are not able to find any pesticide,” Moyong said.
According to scientists, red spider mites are garden pests and are found everywhere on plants, including tea crops, throughout the year.
A tea farmer of Oyan village, Bimol Lego, also said they are left with no option but to witness the destruction helplessly due to unavailability of pesticides.
Reportedly, a seed and pesticide trader in Ruksin town has managed to bring pesticides, which has brought some relief to the tea growers.
The tea planters of the region fear that if the pest attack is not brought under control at the earliest, the tea industry in the state may suffer a heavy loss.