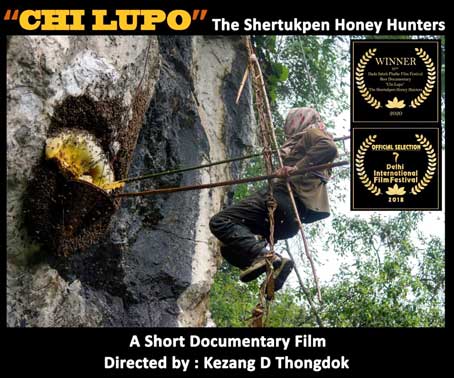 The awards in various categories were announced on Thursday in Delhi, as the nominees could not travel there to attend the ceremony.
Chi (honey) Lupo (hunter) has been made by independent filmmaker Kezang D Thongdok.
In the Sherdukpen community, honey is used for preparing delicacies, and is valued for its medicinal properties.
The documentary was shot through June and July 2019, during the summer honey hunting expedition. Such expeditions are also made during October-November.
Thongdok hails from Rupa in West Kameng district. He has earlier worked as a crewmember in the making of several regional films. Chi Lupo – The Shertukpen Honey Hunters is his debut short documentary.
Thongdok has directed more than 30 regional video albums, and worked as an assistant director in the making of several docudramas for Doordarshan Kendra, Itanagar.
He also worked as an actor and editor in the Sherdukpen movie Besmeh, which won the Prag Cine Award-2015.
Thongdok is currently working on his next documentary, on KhikSaba, an unexplored festival of the Sherdukpen tribe, and on a short film, Baan.