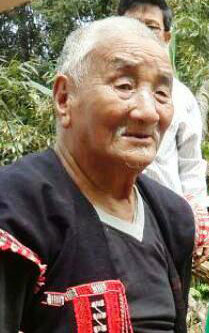 AALO, May 2: Former zamadhar and political interpreter (PI) of the NEFA days, Damli Yomgam, who was popularly known as ‘Zama Kalia’, passed away in his residence in Akker Yomgam village, in West Siang district, on 30 April.
Born in 1929 in Akker Yomgam, late Yomgam had served as zamadhar and PI in various parts of the district during the NEFA days.
He retired from government service in 1986, but continued to serve the downtrodden of the society, emerging as one of the most recognized personalities of the Galo society.
Yomgam was also a great exponent of tribal culture, rituals, faith and beliefs.
Mourning his demise, Kargu Kardi Welfare Society (KKWS) president Toyi Raksap said, “With his demise, a vibrant era is lost and passing away of old genre of people with vast knowledge on growth and development of society is a great loss.”
Stating that the death of the legendary first-generation leader “who led us from the front is a loss for the state,” the KKWS expressed heartfelt condolences to the bereaved family.
The Karka Welfare Society (KWS) has also mourned Yomgam’s demise.
“Post India’s independence, when new administration was on expansion to ungoverned territories, as PI, late Yomgam was a key figure in institutionalizing the customary law in then undivided Siang district with his articulation and astute sense of judgment in settling complex disputes, including murder cases. These judgments have remained a benchmark in local customary law till date,” the KWS said in its condolence message.
It said that, after the 1962 Sino-India war, Yomgam was instrumental in mobilizing volunteers for the construction of the route from Wak village to Liromoba, via Yomcha.
“His biggest contribution to modern society was in the late ’60s and the early ’70s in the field of education when he foot-marched from village to village in Kargu Kardi area under the present day Tirbin, Liromoba, Yomcha and Darak administrative circle to mobilize villagers to send their children to school. This led to massive expansion of modern education,” it said.
While praying for the departed soul, the KWS expressed deepest condolences to the bereaved family. (With DIPRO input)