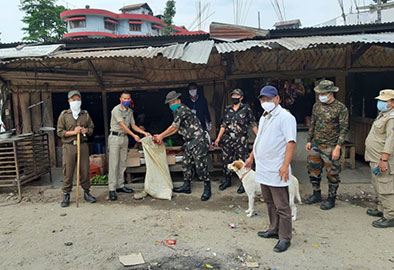 ITANAGAR, May 2: A team of officials led by Senior Veterinary Officer Dr G Phil, with the help of police seized 30 to 40 kgs of pork from the market here on Friday.
The team later disposed of the seized meat in a pit dug at the IMC dumping ground in Chimpu.
Capital Complex DC Komkar Dulom had earlier through an order banned sale of pork in the capital region, in view of the reported deaths of pigs in “epidemic type swine fever.”
Informing that the state government has banned sale of pork throughout the state, the DC urged the people to refrain from buying and selling pork till further orders.
He advised pig owners to not throw pig carcasses into the rivers but bury them properly by digging pits.
The DC informed that such checking drives would be continued. (DIPRO)