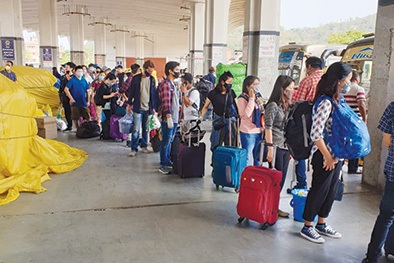 Staff Reporter
ITANAGAR, May 5: Hundreds of stranded students and others are reportedly being brought back to Arunachal in the first phase of evacuation initiated by the state government.
Near about 350 students boarded 18 buses that started from the ISBT Guwahati this morning, and arrived at their respective destinations in Arunachal by Tuesday evening.
Official sources informed that all the students were taken to their respective hometowns for quarantine.
Reportedly, 63 students coming from Guwahati and heading towards the districts of Tawang, West Kameng and East Kameng, registered their names at the Bhalukpong check gate in West Kameng district.
Similarly, at the Banderdewa check gate, 83 students were reportedly brought in and subsequently put under quarantine at the police training centre (PTC). Ruksin check gate recorded 74 students, Dirak received 32 students and Likabali had 35 students, while Namdang recorded 63 students.
At least 147 people have reportedly arrived at the quarantine facility centre at the PTC, including 37 students who arrived from Kota, Rajasthan in the wee hours of Tuesday.
Meanwhile, the Tawang district administration has informed that all passengers, including former secretary to chief minister Sonam Chombay, who arrived at Jang on Tuesday onboard a private bus from New Delhi, have been put under quarantine at two separate government designated quarantine centres at Jang by maintaining all standard Covid-19 procedures.
On Monday, the private bus with 10 people onboard, including the former secretary to CM had managed to reach West Kameng district after initial screening at the Bhalukpong check gate even as authorities denied any knowledge of their arrival.
Earlier, Tawang Deputy Commissioner Sang Phuntsok had denied receiving any official document permitting Chombay’s arrival in the district, while the former secretary to CM was unavailable for a comment on the issue.
Even as the former secretary to CM remained unavailable for a comment despite repeated attempts by this daily on Tuesday, Tawang Deputy Commissioner Sang Phuntsok has come forward to state that the other nine passengers of the said bus were all students coming from New Delhi and not his family.
Speaking to this daily over phone, the DC informed that the nine people, all residents of Tawang and Jang (five girls and four boys) are students and Chombay was “probably accompanying them.”
“On their arrival at Jang, authorities made sure that they maintained all quarantine guidelines and placed them all under quarantine at two separate centres at Jang,” the DC informed.
Meanwhile, the DC stated that another lot of 50 people, who have been scheduled to return from Assam, reached Tawang on Tuesday in two separate buses.
“Of the 50 people who returned, 33 are students, they all have been put under quarantine at various designated centers at Tawang, Lumla and Jang,” he added.
The inter-district movement to eastern Arunachal via Assam also started on Tuesday from Banderdewa with 51 vehicles escorted by the police.
Talking to reporters, Circle Officer cum Incident Commander Bittu Kri informed that “The state government has identified Likabali, Ruksin and Namdang check gates for people to enter various parts of eastern Arunachal and some parts of western Arunachal as well.”