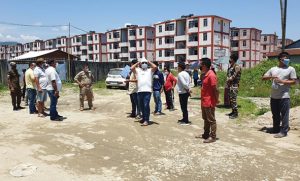 Staff Reporter
NAHARLAGUN, May 10: The decision of the state government to convert the BPL housing complex in Lekhi village into a quarantine centre has run into trouble with locals opposing the move.
The villagers staged a protest here on Sunday when a high-level team, including Home Minister Bamang Felix and Education Minister Taba Tedir visited the BPL housing complex to review the progress of the preparedness.
They submitted a memorandum laying down their apprehension.
“The BPL housing complex is located under the jurisdiction of Lekhi village where more than 2000 villagers are dwelling. The proposed designated quarantine centre for Covid-19 announced by the Government of Arunachal Pradesh is not appropriate and dangerous for the villagers,” they claimed.
The villagers claimed that decision was taken without consulting them.
“We are not against people returning to the state from various parts of the state. But the government took such a big decision without taking villagers into confidence,” said one of the protestors.
They also suggested that the government look for alternative quarantine centres like the multipurpose stadium at Yupia and the Art of Living Centre at Jully.
The education minister, while talking to reporters, informed that concerns raised by the people are being addressed and the issue has been resolved.
“People were apprehensive assuming that we will bring infected persons here. But it was made clear to villagers that only healthy students will be kept in the quarantine and they are convinced with our initiative,” he said.
The minister further informed that 400 flats will be ready within a week and the remaining will take another 10 more days to be ready.
He also added that the Capital Region deputy commissioner will keep in touch with local villagers to address any concern.
Meanwhile, the home minister informed that issues at the quarantine facility in PTC Banderdewa are being addressed.
“The whole thing will be resolved by tomorrow. The Yupia DC is stationed at the PTC and working out a solution to every issue,” Felix said.
Local MLA Techi Kaso, who was also part of the high level team, said there is need for better cooperation to resolve such misunderstandings.
“People have the right to raise concern but it is the duty of administration to properly educate them and address their concerns. Maybe we failed to properly communicate with villagers that led to this situation,” Kaso said.
He urged everyone to think rationally and peacefully to sort out all the issues. The local MLA stressed that there should be strict measure so that there is no lapse at this proposed quarantine centre.
Earlier, there was similar protest at Doimukh where the locals held a protest against the decision to convert the BK Mission School into a quarantine centre.