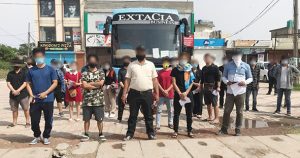 Staff Reporter
ITANAGAR, May 10: More stranded students from various parts of India are returning to the state.
Sources said that 65 Arunachalee students from Punjab are on the way to the state after acquiring a plying permit from the Punjab government.
The first bus started on Saturday evening with 25 students on board from Nayagaon, Mohali (Punjab) and five more students boarded from Ambala, Haryana in the same bus.
The first batch with 30 students on board had reached Lucknow, Uttar Pradesh till the filing of this report. The second batch of 35 students left from Chunni Kalan, Fatehghar Sahib district of Punjab on Sunday for Arunachal.
“They are ready to follow the quarantine guidelines in their respective districts. They left with strict instructions to maintain safety measures, including mandatorily wearing masks and maintaining physical distance” said Lingdum Kame, president of the Chandigarh Arunachal Students Union, who is coordinating both batches.
Commissioner to the Governor, Sagar Preet Hooda is coordinating the teams.
The students who are on the first bus said that they were told that they would be sent to their respective districts where they will have to stay in quarantine facilities. However, there is no clarity as to who will pick them up from Assam so that those who need not come to Itanagar are dropped off to their respective districts. The bus is hired for Itanagar.
“We are told that we will be sent to our respective district quarantine facilities. Few of us are from western Arunachal and others are from eastern and central Arunachal. How will they pick us up as we booked our bus for Itanagar only?” a student travelling in the first bus asked.
The students are expected to reach Itanagar by Tuesday.