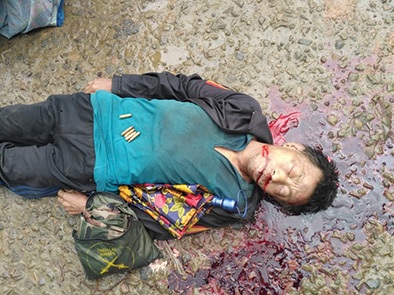 LONGDING, May 16: A civilian was shot dead while several others suffered injuries in a firing by the 19th Sikh Regiment of the Indian army at Pumao village here under Longding district on Saturday.
The deceased was identified as Lamdaan Lukham (60).
According to reports, the incident occurred during a peaceful meeting which was held between the villagers and army regarding an incident involving a few army personnel, who had beaten up one Jimphu Wangnow for no reason earlier, on Friday night.
A commotion broke out when the army personnel who had no sufficient reason to explain their actions tried to leave the meeting midway which angered the villagers.
They pelted stones at the army and in retaliation, the Indian Army fired back at the crowded public killing one civilian and injuring several others.
Meanwhile, the Longding deputy commissioner has stated that the superintendent of police along with the circle officer of Pumao has been rushed to Pumao village and a judicial enquiry will be initiated.
“District administration will provide Rs 50,000 to the deceased and Rs 25000 each to the injured as interim relief,” said the DC and assured that the district administration will bear all expenses of the treatment.
State’s Director General of Police RP Upadhyaya termed it as a tragic incident and said that a judicial enquiry has been ordered by the judicial magistrate first class Longding.
Meanwhile, various civil societies and NGOs of Longding district have strongly condemned the incident and demanded exemplary punishment for the army personnel and the unit commander involved in the incident.
Earlier, the North East Human Rights Organization (NEHRO) lodged two complaints against the 19th Sikh Regiment of the Indian Army at Pumao village with the National Human Rights Commission (NHRC), New Delhi for human rights violation.
In its complaint letter to the NHRC on Saturday, the NEHRO while giving details of the incident which occurred a day before the shooting incident, stated, “In the intervening night of 15 May, one Jinpo Wangow of Pumao Village in Longding district was brutally beaten by a group of Indian Army personnel without any valid reason. At around 8.30 PM the victim was on his way from church when he met a group of soldiers after which they took the victim to their base camp and started beating him black and blue causing severe injuries on his body. Later at around 12.30 am, he was allowed to go home from their base camp.”
“Several cases related to such atrocities and human rights violations have been reported to higher authorities and also to the commission but still the poor villagers of the district fall victim to their inhuman act without any reason. One such case has already been reported to the NHRC vide Case No. 66/2/17/2018. We are very disheartened to inform the commission that the armed forces continue to violate the guidelines for preventing human rights violations under the Armed Forces Special Powers Act (AFSPA), 1958,” stated the NEHRO.
Strongly condemning the atrocities on civilians, the NEHRO further appealed to the NHRC to issue directions to the Ministry of Defense, GoI to abide by the guidelines laid down in the Armed Forces Special Powers Act (AFSPA), 1958 for protection of human rights in its true spirit.
The All Arunachal Pradesh Students’ Union (AAPSU) has also vehemently condemned the incident and termed it a barbaric act on the part of the Indian.
“This act is unbecoming of the Indian Army which claims to be one of the most disciplined forces in the whole world. When the law keepers start terrorising its own people and start taking innocent life in a democracy it negates the very purpose for what they have been assigned in this part of the country. The heinous crime purported by the Indian Army has severely compromised and has contradicted the very underlying purpose to maintain law and order and to neutralise underground elements which they have been deployed for. It reflects the lowest ebb of democratic set up.”
“The random killing of innocent life from time to time by both army personnel and underground elements with impunity in the TCL region has choked the free spirited life of our people. The recent incident has once again brought forth the pathetic situation our people are subjected into and the deafening silence maintained by the elected representatives of the region is not helping the matter either,” stated the AAPSU and urged all the MLAs of the TCL region and state government to strongly register its protest in unison before the union government to hand out exemplary punishment.
While demanding stringent punishment for the army personnel involved in the shooting, the union urged the state government to provide appropriate ex-gratia to the deceased and those injured. (DIPRO/press releases)