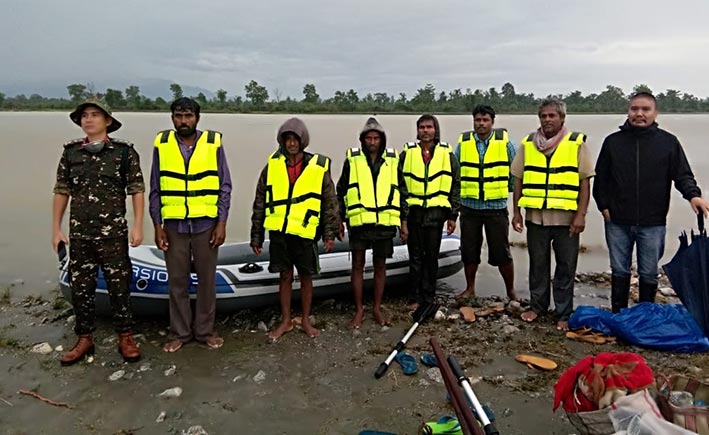 TEZU, May 27: Two people were rescued on Wednesday from the Lohit River, opposite Dimwe BRTF headquarter.
Srawan Yadav (55) and Subhash Yadav (45) were stranded in flood water for the last two days before they were rescued.
The rescue mission was conducted jointly by the Lohit district administration, in collaboration with the Lohit unit police and with the help of local boatmen in rubber boat.
The boat started its mission from Dus Nallah Lohit confluence, and after four long hours of rescue operation in the 15 km long river course, landed near the Chat Puja Ghat, Tezu Nallah to rescue the stranded persons.
The rescue operation team consisted of the DySP and DDMO, with overall coordination by the DC and SP.
Meanwhile, DC Prince Dhawan has issued various directives to tackle the upcoming monsoon season in the district.
Fishing, bathing or any other activities on the riverside by any person by any means in all rivers/ streams etc within the jurisdiction of Lohit district has been prohibited.
The EAC-cum-town magistrate and DFDO have been directed to carry out frequent inspections of riverside to prohibit the said activities in an around Tezu Sadar circle.
Necessary directives have also been issued on similar lines to the EACs of Wakro and Sunpura.
All the head gaon burahs and gaon burahs of Lohit district have been directed to keep close watch on the flood-like situation in their villages and inform the concern administrative officers of Wakro, Sunpura and the DDMO at Tezu immediately of the same.
They have also been instructed to carry out social service camps with the villagers from time to time in their villages to clear water logging and garbage in low lying areas, and drains to avoid water stagnation. They were also asked to maintain a healthy atmosphere and malaria-free villages.
The DDMO and executive engineers of work departments have been directed to take necessary actions and alert all resources and stakeholder to tackle the situation.
A flood control room toll free no. 1077 has been made functional 24×7 during the monsoon period.
Four relief camps have also been established in different locations of the district.
Community volunteers of AAPDA MITRA have been alerted to keep close vigil on flood-like situation and assist the disaster management cell to tackle the situation.
The DVO has been directed to keep sufficient veterinary medicines and vaccines to carry out treatment and vaccination during the monsoon to curb epidemic diseases among the cattle.
The DMO has been instructed to keep sufficient stock of anti-venom for commonly found snakes in the district. (DIPRO)