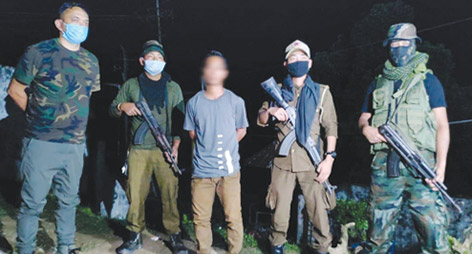 CHANGLANG, May 30: An active NSCN-R operative, identified as Minlong Pansa of Chodok-I village, was nabbed during a raid conducted by police here on Saturday.
Based on police intelligence sources about the presence of underground operatives in Kengkhu village, 7-km from here, carrying out extortion activities, a team of police led by Changlang PS OC Inspector C.A Namchoom conducted the raid at a house and apprehended the self-styled private of the outfit around 6 pm, informed Changlang SP Mihin Gambo.
During interrogation, the cadre disclosed that he had joined NSCN-R in June 2018 and underwent jungle warfare training under the outfit.
A case has been registered at Changlang Police Station against the operative.
Meanwhile, TCL DIGP Kime Kaming commended the police team for apprehending an active NSCN-R operative, which he said ‘will motivate the police personnel to take stringent measures against all anti-social elements, like drug peddlers and underground organizations in the TCL region.’