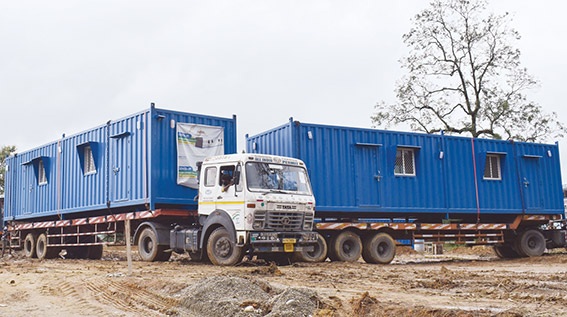 MIDPU, Jun 3: The construction of the pre-fabricated exclusive Covid-19 hospital started here on Wednesday under the watchful eyes of the Papum Pare district administration.
The 35-bedded hospital is being constructed on a government plot near the mental health hospital. Each pre-fabricated cabin will accommodate five beds and altogether seven cabins will be installed making it a 35-bedded hospital.
Health Minister Alo Libang informed reporters that materials for two cabins have arrived and the rest are on the way.
“We are getting the best materials available from Tata Steel,” he said.
The health minister also added that the Papum Pare DC is looking after the land issue at the site and claimed that so far everyone has been supportive of the hospital.
Doimukh SDO S Tayang, who was supervising the work at the site, informed that the land issue has been sorted out.
“Initially, some problems were created by the locals, but now everyone is supporting the work. We managed to convince them and now they are supporting the work. There is no issue now,” he said.
One of the local residents, Tamchi Tahar made it clear that they are not against the construction of the hospital but wanted assurance from the government that the new hospital would be properly segregated from the local inhabitants.
“We are not objecting to the construction of the Covid-19 hospital, but the locals should have been properly consulted before authorities started the. We now demand construction of a proper boundary wall around the hospital and a new road leading to the hospital should be constructed. The district administration is currently using the road constructed by the locals,” he said.
He further appealed to the state government to look into the concerns raised by the local residents.