ITANAGAR, Jun 4: Two jawans of Gacham (West Kameng)-based 7/8 Gurkha Regiment rescued a pregnant barking deer from drowning in the Zidhinkho river on the afternoon of 2 June. 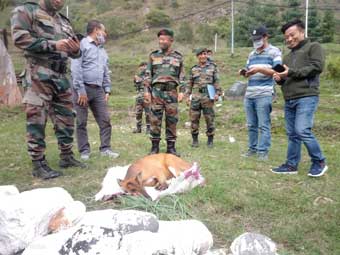 Later, the deer, which was handed over to Rupa DFO Millo Tasser in the presence of ADC Suraj Gurung, was released inside the Eaglenest Wildlife Sanctuary by Rupa Range Forest Officer Yachang Kani and his team.