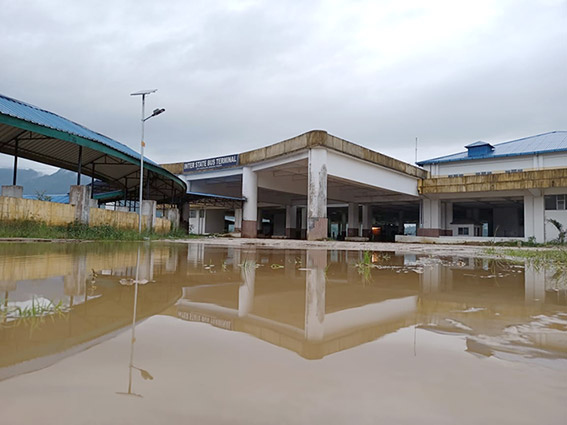 LEKHI, Jun 7: The interstate bus terminal (ISBT) here is flooded with mud and water, and passengers are facing a harrowing time because of it.
The lack of a proper drainage system has caused flooding all around the bus terminal building. It is said that if urgent action is not initiated, the mud and water might start entering the main building.
“The government should look into the issue and take urgent action. It is a shame that the ISBT, which is kind of a gateway to the state, is in shambles. This is a new building and is hardly three years old, but it is already in a dilapidated condition. The situation is pathetic,” said a passenger.
Because of the flooding, the bus drivers are also finding it hard to find parking spots.
Reacting to the situation, Transport Minister Nakap Nalo said the department is aware of the problem.
“The main issue is drainage. The department is planning to construct a master drainage system and Chief Minister Pema Khandu has even approved fund for it. But because of the Covid-19 pandemic the tender could not be done till now,” the minister said.
He said the tender would be floated after July, “and hopefully work will start after that. Until the drainage system is improved, this problem will persist.”
The minister said that earth-cutting carried out near the IBST also blocked the drains, causing flooding in the area.
Stating that he has been giving top priority to improving the ISBT ever since he took over as the transport minister, Nalo said the department is working on a plan.
“Master drainage system, installation of CCTV, improvement of lighting system and ticket counters will be done. The CM has taken note of the problem and has provided funds too. The money is with the department. People will definitely see much improvement at the ISBT in future,” he said.
Nalo also said action will be taken against people who have encroached on a section of the drain at the ISBT.