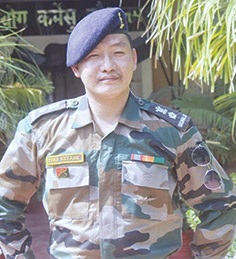 Staff Reporter
ITANAGAR, Jun 13: Arunachalee army officer, Major Tero Keyang of the Indian Army Corps of Signals, was promoted to the rank of lieutenant colonel on Friday.
A resident of Seppa in East Kameng district, Lt Col Keyang comes from a very humble background. He did his schooling from the government schools in Seppa. He joined the Indian Military Academy, Dehradun, in June 2008 through the university entry scheme after obtaining a BTech degree from the NERIST, Nirjuli.
He was commissioned into the Corps of Signals in June 2009 as a lieutenant. Currently, he is posted at the Jodhpur military station in Rajasthan.
Lt Col Keyang has undergone various army courses, including the junior command course from the Army War College, physical training course from the Army Institute of Physical Training, and company commander course from the Military College of Engineering.
He has also completed various important appointments in formation, which include the Strike Corps and the Armoured Brigade, and also operated in the active militancy-infested Kupwara district of Jammu & Kashmir.
He was one of the member officers of the ‘Pay Back to Society’ initiative of the Arunachalee armed forces officers, which was supported by Governor BD Mishra.
Chief Minister Pema Khandu congratulated Lt Col Keyang on his promotion.
In his congratulatory message on social media, the CM said: “Proud to see as many officers in the Indian Army from the frontier state of Arunachal. Congratulations to Major Tero Keyang on being promoted as Lieutenant Colonel in the Indian Army. My best wishes for a successful career ahead and keep making our country proud.”
Deputy Chief Minister Chowna Mein also congratulated Lt Col Keyang on his promotion. “My hearty congratulations to Major Tero Keyang for his promotion to Lieutenant Colonel in the Indian Army. Best wishes for a bright career ahead,” he tweeted.
Khandu also congratulated Laichat Paul Wangpan of Longding district on being commissioned into the Indian Army as a lieutenant after successfully completing training from the Officers Training Academy, Chennai.
Lt Wangpan is the first from the Wancho community to serve as an officer in the Indian Army. He began his career as a sepoy in the army.
The chief minister lauded his sheer determination and wished him a bright career ahead.
Meanwhile, the East Kameng Social Welfare & Cultural Organization has lauded Lt Col Tero Keyang on his elevation in Indian Army service.