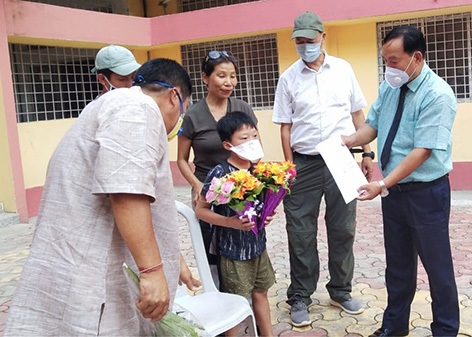 He was our child: DMO

Staff Reporter
ITANAGAR, Jun 14: A 12-year-old boy has recovered from Covid-19 and was released from the Covid care centre (CCC) in Yingkiong on Sunday.
“Today we are glad to release our lone Covid-19 patient from CCC Yingkiong after two consecutive RT-PCR test negative results,” said Upper Siang DMO, Dr Dubom Bagra in a statement.
DC Taper Pada handed over a ‘cured from Covid-19 infection’ certificate to the boy.
The boy, who returned from Dehradun, had tested positive on 30 May while in institutional quarantine.
After testing positive, his second test had come negative, but his third sample tested positive. The next two tests came negative, following which he was released.
“He was very happy when he was informed about his release from the hospital,” Dr Bagra said.
“The boy was alone in the CCC, so we had to ensure that he was not lonely. All the doctors and nurses treated him like their own child. The food he liked was cooked for him,” the DMO said.
“We got him a mobile phone and video game player to keep him engaged,” he said. “When he heard that he has tested negative, he packed his bag and was ready to leave.”
Dr Bagra congratulated all the doctors and nurses of the district hospital in Yingkiong, who handled the case with utmost care and love.
He also thanked the administration and the police team for their untiring support to the health department.
“I am pleased that Upper Siang is Covid-19-free,” the DMO said.