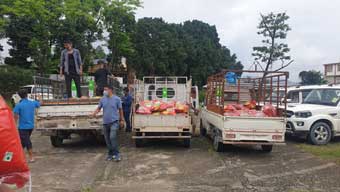 In Itanagar, several senior Congress leaders visited Deepak Nabam Living Home in Senki Park, the Donyi Polo School for the Hearing & the Visually Impaired in Chimpu, the Second Coming Prayer Centre in Sekar Dokap, and other places.
Besides distributing essential items, the Congress leaders interacted with the people there.
Arunachal Pradesh Mahila Congress president Nabam Yakum said, “Sharing time and happiness with people in need will motivate the party workers to do good for the society.”
She also expressed deep sorrow over the Galwan incident, in which 20 Indian soldiers died.
“It is a sad moment for all of us. We have lost 20 brave soldiers, and we shall not tolerate it in any way. We condemn it and appeal to all the party leaders and workers to condemn the act of the Chinese army and government,” she said.
Similar programmes were organized across the state by the party’s district and block units and other frontal wings.