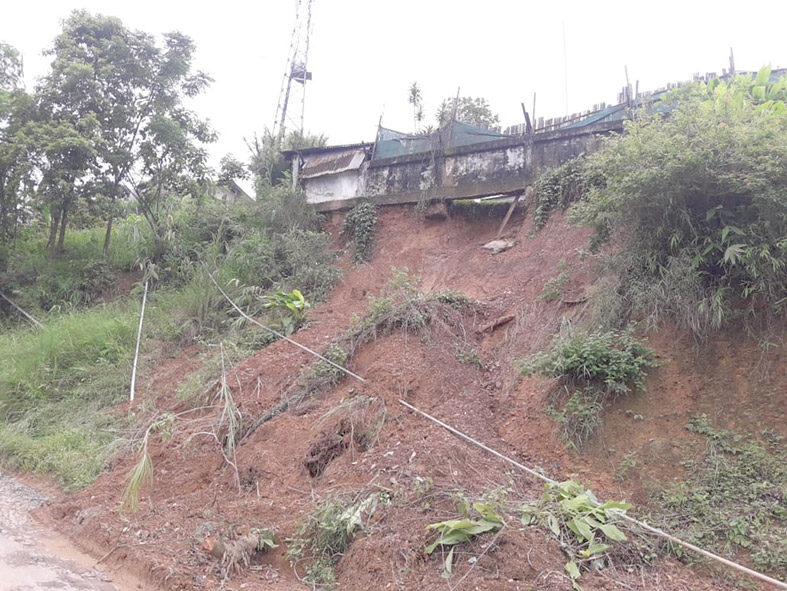 Staff Reporter
ITANAGAR, Jun 27: Massive landslides and mudslides have been reported at multiple locations on the Doimukh-Potin stretch of the Trans-Arunachal Highway.
Sources informed that there are several vulnerable locations on the entire stretch. Commuters were reportedly stranded for hours on Saturday morning at the Kala Miti point, a few kilometres from Hoj village, after a mudslide blocked the highway.
The PWD highway later deployed men and machinery to clear the mudslide.
“The road is now somehow through, but mudslides are occurring in the Kala Miti area every hour due to the rain. The remaining portion of the road from Doimukh to Potin is through for traffic, but there are so many vulnerable locations where landslides can occur anytime if the rain continues,” Highway EE Gyati Anda said.
Some portions of the highway have reportedly been swept away by landslides, leaving narrow strips behind, posing a danger to vehicular movement. It is said that a caved-in portion of the road at Hoj village has not been repaired for years.
Urging the department to repair the vulnerable parts of the Doimukh-Potin highway, All Nyishi Youth Association general secretary Bengia Tada said “the road is a lifeline for seven districts; the department should restore it immediately, before it collapses.”
DIPRO reports: In Longding, torrential rains have triggered landslides in several areas of the district.
A landslide damaged the entire 500 sq mtr area of Engineer Colony in Longding, and many private and government buildings in the colony have suffered damages. Some of the buildings have sunk by a few feet, while several others have been damaged beyond repair.
Some of the buildings sustained heavy cracks in the walls. Several commercial buildings were also damaged in the landslide.
Local MLA Tanpho Wangnaw visited the colony on Saturday to assess the damages. Accompanied by district BJP president Pankhu Wangsu, the MLA interacted with the residents and assured to extend all possible help from his side.
Wangnaw also inspected the primary school building, which has been damaged by the landslide, and assured to “take up the matter on priority.”
Meanwhile, the district administration has promulgated an order directing the residents of the landslide-hit colony to vacate their houses and move to a safer location. The administration has also directed that the government primary school operate from the vacant government middle school until further orders.
It may be mentioned here that the DA has set up relief camps in the district as a precautionary measure, which can be availed by the affected families.