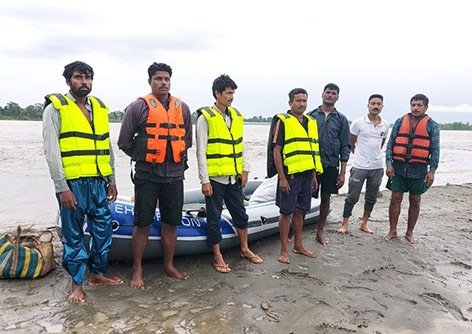 TEZU, Jun 27: Two stranded persons were rescued by a joint team of the police and the district disaster management agency, with assistance from local fishermen, from an island in the Lohit river here in Lohit district on Saturday.
Kamal Sharma (39) and Ashok Yadav (40) – one of them a patient – were stranded on the island for the last several days
as the water of the Lohit river has risen to a dangerous level, owing to incessant rain in the last few days.
Following receipt of information on Saturday morning, a rescue operation, led by DDMO Damchen Norbu and DSP Thutan Jamba, was launched by the Lohit district administration. The stranded men were rescued after three hours of relentless efforts.
Till now, the administration has rescued six persons from floodwaters.
Meanwhile, torrential rain in the last few days has affected normal life in the district, with Tafragam, Duraliang, Mepo, Bekhuliang and Danglat villages being the worst affected.
With the Lohit river flowing above the danger level, the turbulent waters of its tributaries have inflicted huge damages to infrastructure, standing crops and livestock.
The district administration has started “flood rectification work” on a war footing.
DC Prince Dhawan has issued direction to all stakeholders, asking them to keep a strict vigil on the flood situation and evacuate or shift residents of all flood-prone areas to designated relief camps in all three circles of the district.