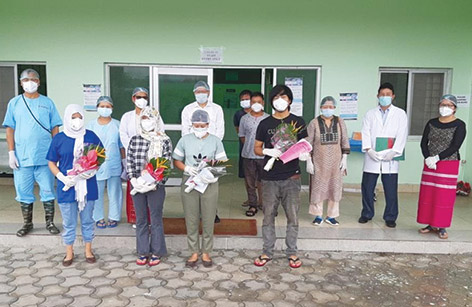 Active cases in E/ Siang down to zero

ITANAGAR, Jun 28: The Indo-Tibetan Border Police (ITBP) detected its first three Covid-19 positive cases in the Itanagar capital region on Sunday.
All three have returned from Assam, according to health officials.
On 22 June, reports had surfaced that 217 ITBP personnel had returned to the state but had not been tested. Sources had informed that the number of returnees was likely to increase within the week.
Reportedly, 110 ITBP personnel had returned to Kimin till 22 June, and 61 more were en route, taking the number of the ITBP personnel in Kimin who had not been tested to 171.
Among other paramilitary forces, the NDRF has reported 24 positive cases, while the GREF has reported four cases till date.
Additionally, one case each was detected in Namsai and Changlang districts on Sunday. The person in Namsai is a returnee from Tamil Nadu, while the one in Changlang is a returnee from Assam.
All the cases were reportedly detected in facility quarantine and all are asymptomatic. They have been shifted to Covid care centres.

6 released after testing negative
Meanwhile, five people in East Siang district and one in Changlang district were released after testing negative twice consecutively. They have been advised strict home quarantine for 14 days.
After the five recoveries, East Siang currently has zero active case.
Deputy Commissioner Kinny Singh commended the combined efforts of the administration, the police, the health department, CBOs, NGOs and various stakeholders “who worked in high-risk situation,” and expressed hope that the people would follow the guidelines framed by the government and the administration.
“It was a pleasant moment for all of us to discharge all patients,” Joint DHS, Dr D Raina said.
The BPGH has started using TrueNat for conducting confirmatory tests on Covid-19 patients before discharging them from the hospital.
DMO Dr Kaling Dai said the onus is now on the people to “change their living style by wearing masks in public places, avoiding gatherings, ensuring hand sanitization and, above all, by not stigmatizing people who suffer from the disease because he or she is very much one of us.”
The total number of people who have recovered from the virus in the state stands at 60, while 121 remain positive. So far, 182 cases have been detected in the state, with one Covid-19 casualty. (With DIPRO input)