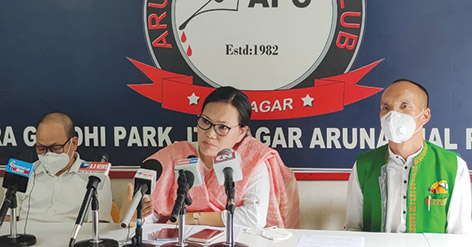 Staff Reporter
ITANAGAR, Jun 29: The Arunachal Pradesh Congress Committee (APCC) on Monday forwarded a memorandum to the president of India through the governor, registering its protest against the hike in petrol and diesel prices across the nation.
Terming the hike in the fuel prices over the past few months “unprecedented,” the APCC appealed to the president of India to direct immediate rollback of the hiked prices and the increased excise duty post 5 March, and also to bring petrol and diesel under the goods & services tax regime at the earliest.
Addressing a press conference at the Arunachal Press Club here, APCC general secretary Mina Toko claimed that the Modi government “profited about Rs 18 lakh crore in the past six years by increasing the excise duty on petrol and diesel alone.”
She said the central government under Prime Minister Narendra Modi should have been working on reducing the petroleum prices instead of increasing them when the entire country is reeling under a pandemic, an economic slowdown, and incursion from the Chinese side.
Terming the price hike “extortion and daylight corruption,” Toko said that the extent of profiteering by repeated increases in the prices and excise duty on petrol and diesel “have surpassed all forms of exploitation.”
She said that on 5 March, the prices of petrol and diesel were increased by Rs 3 per litre. “On 5 May, the excise duty on diesel was raised by Rs 13 per litre and on petrol by Rs 10 per litre. Between 7 June and 24 June the prices of petrol and diesel were consecutively increased for 18 days, leading to the hike in the price of diesel to Rs 10.48 per litre, and of petrol to Rs 8.50 per litre.
“Hence, in the last three-and-half months alone, the BJP government has increased the prices and excise duty on diesel by Rs 26.48 per litre and on petrol by Rs 21.50 per litre. What can be a worse exploitation of the people by the government?” said Toko.
She further said that on 24 June the crude oil price was at $ 43.41 or Rs 3,288.71 per barrel, which contains 159 litres. “Hence, the per litre crude oil price as on 24 June would be Rs 20.68 per litre, whereas the prices of petrol and diesel were touching Rs 80 per litre.”
The APCC also condemned the prime minister over the way he handled the Galwan incident and accused him of “misleading the masses” with false information.
“While the People’s Liberation Army of China is taking Indian territory inch by inch, Prime Minister Modi is busy appeasing the Chinese president,” the APCC general secretary said.
She also alleged that on the one hand the BJP is asking all to boycott Chinese-made products, and on the other, “it is receiving multiple crores of funds from the Chinese corporate houses.”
“It is time the citizens of India retrospect whether we are in safe hands with Modi and whether we are being led in the right direction,” she said.
Condemning Modi for “giving misleading statement on the Galwan Valley standoff that PLA did not enter into Indian territory,” APCC general secretary Chera Taya said, “Modi’s statement is unfortunate. The PLA mouthpiece, Global Times, praised Modi, which is an unprecedented development. The people of India should raise their voice against Modi.”
Taya further said: “Arunachal Pradesh, which shares border with China, is not safe under the current leadership of Prime Minister Modi.”