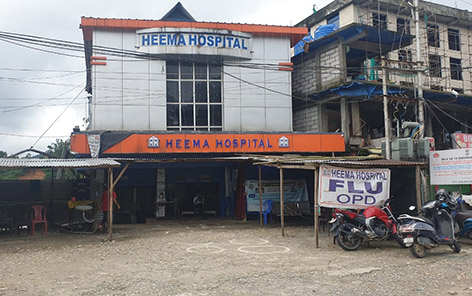 ITANAGAR, Jul 22: The Heema Hospital here has been closed for the next two days after a staff tested positive for Covid-19 on Wednesday during a rapid antigen test conducted for the hospital staff.
The medical superintendent of the hospital, Dr Kesang Wangdi Thongdok informed that the hospital has been shut down as a precautionary measure.
“The rapid antigen test for hospital staff started three days ago. Majority of staff tested negative, barring one who tested positive on Wednesday afternoon. She has been isolated, and all her primary contacts that had earlier tested negative were re-tested immediately. The repeat tests have come negative for primary contacts,” said Dr Thongdok.
He also said primary contacts have also been kept in isolation.
“The RT-PCR test will be done for positive cases. The authorities have been informed of the development,” said Dr Thongdok.
Further, he informed that there are about 200 staffers in the hospital and barring one all have tested negative so far.
“Only around 10 percent of the staff is left to be tested and they will be tested on Thursday,” he added.
Meanwhile, a patient also tested positive for Covid-19 at the Niba Hospital in Papu Nallah on Wednesday.
However, instead of a complete shutdown, the hospital has decided to close routine OPD, indoor and OT services till 25 July.
The emergency/ casualty OP services will remain open.