ITANAGAR, Jul 23: Even as the health department is fighting tooth and nail to break the Covid-19 transmission chain in the Itanagar capital region, report of abject condition of Kamle district’s health facilities has surfaced. 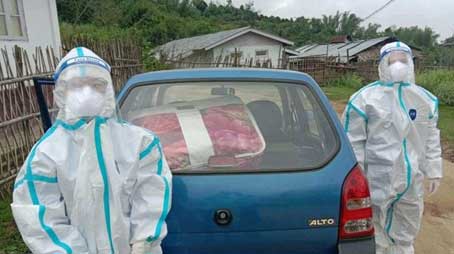 A photograph of Kamle District Epidemiologist Dr Kapu Tapu using his own Maruti Alto car to drive around to collect samples for antigen tests in Raga has surfaced on social media. The picture shows Dr Tapu along with a staffer, in full PPE, driving around in Raga town, tracing the contacts of the first Covid-19 case of the district.

Kamle district registered its first Covid-19 case on Wednesday. He is a returnee from Itanagar and has been shifted to the Covid care centre at the circuit house in Raga.

Reportedly, lack of proper ambulance, along with ramshackle health infrastructure has forced the epidemiologist to use his own old car. This daily could not reach Dr Tapu for a statement. However, DMO Dr Nani Rika confirmed that Dr Tapu has to use his own vehicle due to shortage of vehicles in the department.

“For contact tracing, there is no vehicle for staffers. The lone ambulance is very old, on and off road. It is now used for shifting the Covid-19 positive case. It may stop functioning at any moment,” said District Surveillance Officer Dr Kapu Sopin.

Dr Sopin claimed that a Tata Sumo donated by former MLA Tamar Murtem during his tenure in 2018 is now in a bad shape due to overuse. He further informed that the Tata Sumo was used by the medical team to carry the Covid-19 positive case and consequently exposed themselves to the patient.

“Fearing risking their families’ lives, the staffers are now using their own vehicles for Covid duty. We haven’t received an ambulance yet after creation of the new district,” he added.

Health Secretary P Parthiban informed that the department is procuring 30 ambulances for the state, which would be distributed to the districts. He informed that one ambulance has been allocated to Kamle district and would be delivered soon.

“How long should we use our own vehicles on the dilapidated road on government duty? We need government vehicles,” said Dr Sopin.