PASIGHAT, Jul 23: The rising Siang river eroded about a 550-metre stretch of the Mebo-Dhola road between Kongkul and Namsing villages, in East Siang district, on Wednesday night and snapped road communication there. 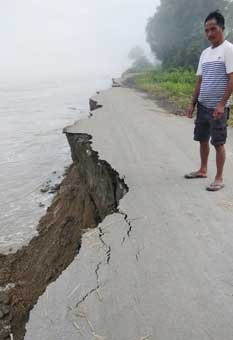 According to official sources, approximately 400 hectares of crops and land have been eroded by the river.

Electricity connection to Namsing, Mer and Gadum, and villages in Paglam circle (Lower Dibang Valley) has also been snapped after the 11 kv OHT line was washed away due to bank erosion.

A 40 kms long PWD road on the Mebo-Dhola route also linked Mebo subdivision of East Siang and parts of Lower Dibang Valley with the Dhola-Sadiya area in Upper Assam’s Tinsukia district. Villages including Namsing, Gadum and Mer in Lower Mebo in East Siang and adjoining parts of Lower Dibang Valley district are now cut off after the PWD road, which is considered a lifeline for the villages, was washed away.

The public works department is constructing an alternative road beside the eroded Mebo-Dhola road to restore road communication. It is likely to take some days to be completed.

The NH 513 PMY road under the NHIDCL, which is blocked at 36.500 kms, is likely to be restored by Thursday.

The course of the Siang is turning left at Sigar in Mebo subdivision and causing constant erosion on the left bank. Reports from Mebo say that the river has already inundated a portion of the Sigar primary school playground and is posing a threat to the school building.

Unabated erosion by the river has also destroyed several acres of fertile cropland in Kongkul, Serum, Namsing, Gadum and Mer villages, and is posing a serious threat to the local residents.

At the same time, erosion by the Siang has displaced 100 families in Serum and Kongkul villages, situated on the left bank.

Now the villagers have resorted to offering prayers to the Siang at Namsing to stop the erosion.

“We adopted all traditional anti-erosion methods by using locally available materials, but all of it went in vain. Now we are putting our trust in the divine power to save our habitat,” said Namsing village Gaon Burah Basanta Perme.

It may be mentioned that a boulder bund worth Rs 30 crore under DoNER ministry funding had been erected on the left bank of the Siang river at Sigar, but it was washed away by the first wave of flashfloods.

Meanwhile, Mebo MLA Lombo Tayeng reviewed the situation with the East Siang DC, the PWD eastern zone CE, the electrical EE, the WRD EE, the DDMO, and others on Thursday and suggested measures to restore the road and find an alternative within a week.

He also directed the power department to restore electricity supply as soon as possible.

Urging the people not to panic, the MLA said the district administration is preparing for all situations. (With DIPRO input.)