ITANAGAR, Jul 24: Papum Pare district has reported 30 new cases of Covid-19, taking the total to 54 in the district. All are reported to be ITBP personnel, and were detected in quarantine facilities.
The state reported a total of 65 cases, including five government employees in Tirap. Two are reported to be police personnel, one a health worker, and another a WRD staffer. One is a returnee from Assam.
Of the 65 total cases detected in the state on Friday, six are reported to be symptomatic.
Lohit has reported three cases, and all are BRTF returnees from UP. The cases were detected in quarantine facility.
West Kameng reported yet another case of a military man being positive. The district currently has five cases.
The Itanagar capital region (ICR) reported 23 cases, taking the total to 374.
Meanwhile, 58 people were discharged from various Covid care centres, including 45 in the ICR, 10 in Changlang, two in Lower Subansiri, and one in Namsai.

2830 antigen tests conducted in ICR
The health department conducted a total of 2830 antigen tests on Friday and detected 23 Covid-19 positive cases in various parts of the ICR.
Briefing the media, ICR DMO Dr Mandip Perme said 2627 tests were conducted at various wards under the Itanagar Municipal Corporation. Nineteen people tested positive for Covid-19 during the tests carried out at the wards, he said.
Tests were also conducted at the Banderdewa check gate and at the health department’s testing kiosk at the Hotel Donyi Polo Ashok.
“At Ashoka hotel kiosk, out of 10 people, one tested positive, and at Lekhi state quarantine facility, out of 28 people who were tested, one person tested positive,” informed Dr Perme.
At the Banderdewa check gate, 165 people were tested, including truckers, and two positive cases were detected.
The DMO also informed that the district jail in Jullang, the state civil secretariat, and the offices of the deputy commissioner and the superintendent of police have all been covered.
He said there is an encouraging trend of the number of cases going down in the ICR.
“We have drastically increased the number of tests across the ICR and are trying to cover as many people as possible. By 3 August, when the lockdown ends, we will cover almost all the parts of the capital, which will help to isolate positive cases and thereby break the chain,” said Dr Perme.
He added that all frontline workers have been tested and soon the health department is going to conduct tests on the bank officials, especially in Itanagar. 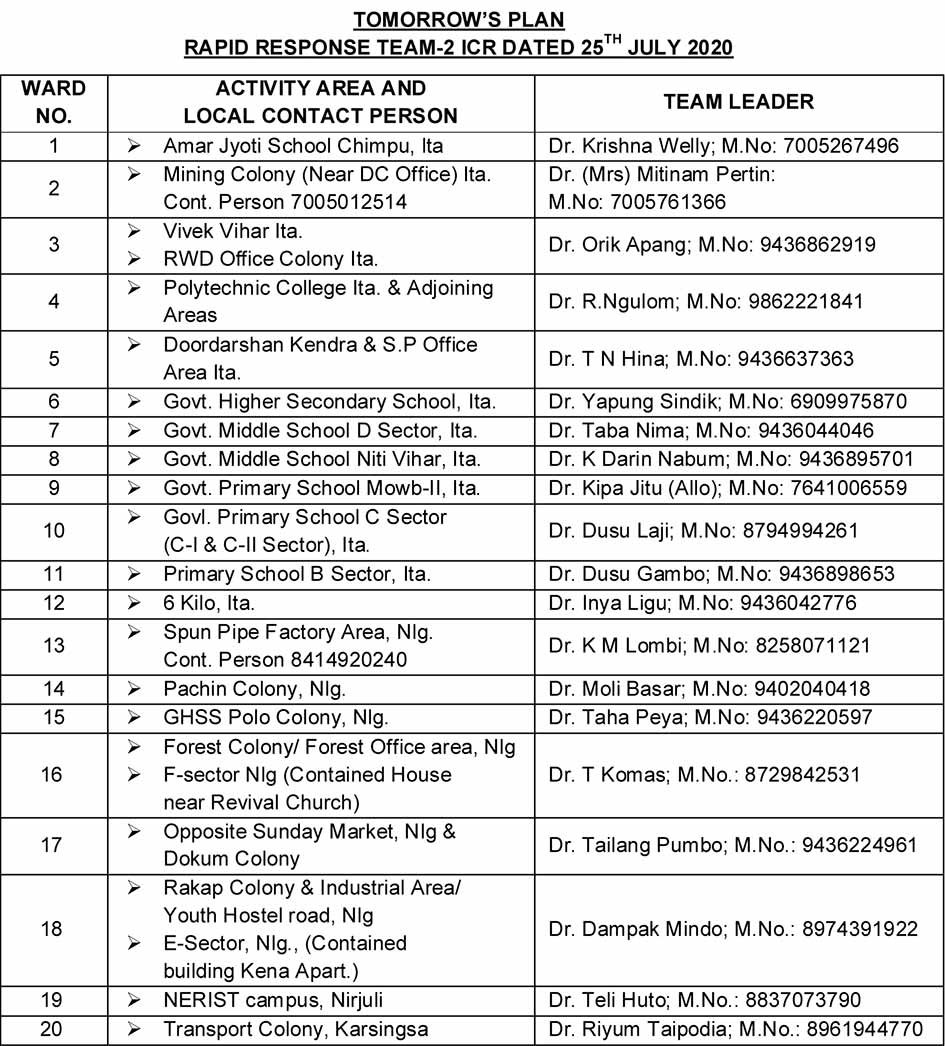