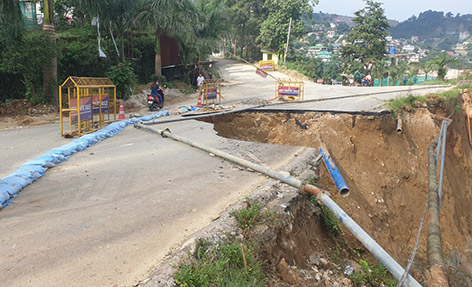 The road had been in a damaged state at the same site for a few years. The state government had sanctioned fund for its restoration and work was also carried out. However, the heavy downpour this year has once again damaged a major portion of the road near the trijunction in the VIP area of Niti Vihar.

For now temporary arrangements have been made, but the locals allege that there has been no concrete solution, even though many top officials and politicians stay in the area.

When contacted, PWD Capital Division A Executive Engineer, TN Tara said that the department is aware of the damaged road, and that officials have visited the location several times.

In the meantime, another portion of the road has been washed away and it is in a bad shape.

“We are planning for a permanent solution, and a team of senior officers led by Chief Engineer (Drawing & Design) Atop Lego, the SE and others inspected the area. Proposal will be sent to the state government for consideration,” Tara said.