ITANAGAR, Aug 6: Chief Minister Pema Khandu on Thursday reviewed the status of all the completed, ongoing and proposed road projects in the state, as well as the works on the Itanagar-Naharlagun highway and all the sectoral roads in the capital. 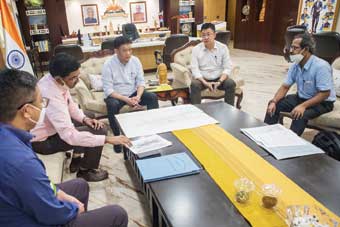 During a review meeting, which was also attended by DCM Chowna Mein, Khandu directed the department concerned to expedite the work on the Itanagar-Naharlagun highway. He assessed the extent of the damages caused to the highway by the recent flooding and landslides.

The CM also assessed the damages caused to the sectoral roads in the Itanagar capital region by landslides triggered by incessant rains.

He asked the works department to “immediately execute work on restoration of all sectoral roads in the capital region damaged by the recent flood.”

The chief minister further asked the department to “develop cost-effective innovative methods to minimize damage of roads due to landslides.” (CM’s PR Cell)