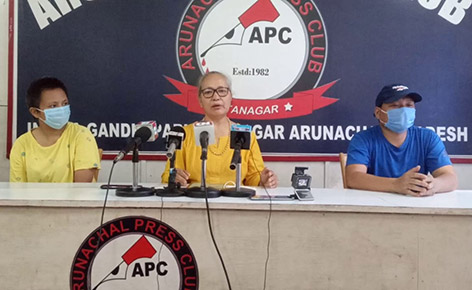 ITANAGAR, Aug 10: Social activist Jarjum Ete and advocate SD Loda, along with a group of other citizens on Monday sought withdrawal of the draft notification of the Environment Impact Assessment (EIA)-2020.

The draft EIA-2020 was circulated by the ministry of environment, forest & climate change (MoEFCC) on 23 March, and is open for public comment till 11 August.

The team raised concerns over various points, including the post facto environment clearance for projects under Category B2, subverting the public hearing process, and releasing the draft notification only in English and Hindi and publishing it only on the internet.

The citizens also questioned why the power to officially report environmental violations in projects has been given to the project developers and government authorities only, leaving no scope for the directly affected communities to report violations.

Addressing reporters here on Monday, Ete questioned the state government how it intends to ensure that the rights and privileges of the state’s indigenous tribal community are protected.

Terming the draft EIA “flawed,” Ete asked community-based organizations regarding their visions and how they intend to protect the rights of the tribal community as “the State of Arunachal Pradesh Act, 1986, does not protect our rights to our own natural resources.”

“Unlike states like Nagaland and Mizoram, the state is not protected under the 6th schedule, and Article 371 (H) does not provide constitutional protection to the rights of the indigenous tribal community,” she said.

Ete also said that the “EIA-2020 draft will be disastrous, especially for a tribal state like Arunachal Pradesh, as the state government in 2010 said that Arunachal does not require the Forest Rights Act, 2006 (because all indigenous people are tribal).”

Appealing to the public to come out in support of their demand for a better future for Arunachal, Ete requested citizens to ensure the withdrawal of the draft EIA-2020 by e-mailing their concerns and objection to [email protected]

Pointing out that the draft EIA-2020 notification directly contradicts the basic precautionary principles of the EIA-2006 environmental clearance, Loda said that the EIA “legitimizes post facto clearance, which means that even in cases where a project has come up without environment clearance, the project can continue to run.”

“The draft proposes to regularize violations that may occur, when instead it needs to take stringent action against the defaulting project proponent and shut down violating projects,” he said.

The notification includes only those areas notified by the MoEFCC as eco-sensitive zones and areas. These exclude reserve forests and other ecologically fragile areas, such as high-altitude ecosystems, wetlands, deserts, floodplains, peatlands, mangroves, habitats of sensitive flora and fauna and watershed areas, which eases clearance for projects to be undertaken in ecologically significant areas, endangering wildlife.

Loda also said that the notification undermines the EIA-2006 notification “by exempting various types of projects from having to conduct public hearings before beginning construction,” including B2 projects and projects concerning national defence or security, “thus making room for non-transparency.”

“Public consultations are critical for such developments. Removing them is no less than taking away the democratic rights from the local communities, and the only opportunity to voice their concerns on projects and other developments that directly impact their lives,” he said.

Loda also said, “It is sad that the environment ministry needs to be reminded of Article 51 A (g) of the Indian constitution, which says: ‘It shall be duty of every citizen of India to protect and improve the natural environment, including forests, lakes, rivers and wildlife, and to have compassion for living creatures’.”

The EIA is a regulation through which the impacts of various developmental projects, land use, forest diversion, industrial pollution, etc, on the environment are studied, and used to make informed choices in developmental decision-making.