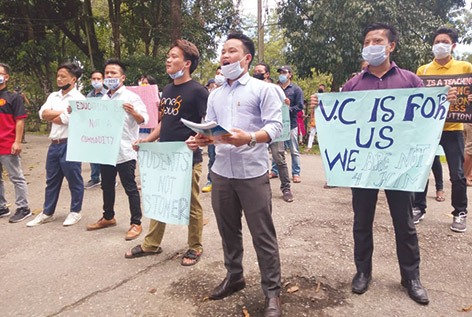 RONO HILLS, Sep 1: The Rajiv Gandhi University Students’ Union (RGUSU) went ahead with its protest against the fee hike on Tuesday morning and students sat outside the vice chancellor’s (VC) office till late night for an audience with the RGU authorities.

In the morning, students currently in the capital region attended the protest, displaying placards and shouting slogans against the hike in the admission fees, and the RGU authorities’ alleged lackadaisical attitude towards their demands.

Earlier, RGU Registrar T Riba spoke to reporters and claimed that about 80 percent of the students had paid the admission fees.

“There is no hike in fee. At the time of joining, every student gets a prospectus which cites the admission fees for each semester, and it does not change till the fourth semester. The students already know how much they have to pay,” he said.

The registrar informed that a committee which had been formed to look into the matter found that almost 80 percent of the students paid their fees.

“I don’t know why some departments have not taken admission,” he added.

On enquiries regarding considering reducing the fees in view of the pandemic and the lockdown, the registrar said, “The fees were not increased during the pandemic. The students know the fees have been the same since the first semester and they should have been prepared for their admissions.”

He also said that examination fees were reduced for the intermediate and semester-end students.

RGUSU president Dopum Sonam said several departments had submitted separate representations seeking a concession in the admission fees for the current semester, citing financial difficulties faced by the students and their families due to the Covid-19 pandemic and the subsequent lockdown.

“Since the RGU authorities did not consider any of the representations, some went ahead and paid the fees, while some students took the step of boycotting the admission process,” Sonam said, adding: “We are sure that many of those who did pay the admission fees had to manage the money with much difficulty.”

“The particulars of the admission fees have also not been provided, and the students are blindly paying whatever amount the university seeks from us,” he said.

Sonam pointed out that the students are not against a nominal fee hike but against the hikes that reached as high as 60 percent since last year.

In the meantime, MA third semester students of computer applications and mass communication streams said that the current fee is “too high and illogical” for online classes.

“We had minimal classes in the first semester due to the lockdown, but we will obviously not be refunded for that. RGU should have considered that and reduced the fee this semester. We may not even have interactive classes, practicals or field activities in the third semester, or use any of the facilities of the university. It feels like we are paying for exams instead of classes,” the students said.

They said there are still many students in other departments who have not paid the fees because their appeal letters were not accepted by RGU, while some paid for the very same reason.

They also said they would not participate in the admission process unless there is a concession in their admission fees.

By nightfall, RGU issued a notification extending the admission dates till 7 September, considering the Covid-19 pandemic and poor connectivity issues.

At the time of filing of this report, the students on the campus informed that RGUSU representatives had been invited by the VC for a discussion at around 9:30 pm.