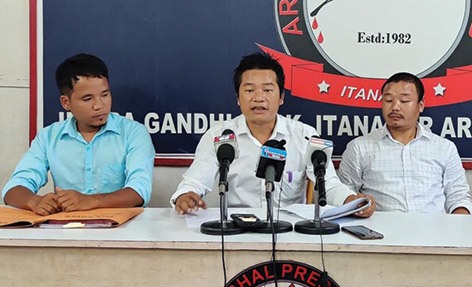 In a press conference it convened on Wednesday, the union claimed that the planning department had in 2018 sanctioned the amount at the disposal of the ADC for procuring furniture, fixtures, etc, for the mini-secretariat in Sagalee, in Papum Pare district.

PPDLSU president Teli Naga claimed that the whole process of tendering and execution of work was fake and involved corruption.

“As per the details through Right to Information, the information & public relations department has disclosed that there was no such notice inviting tender (NIT) advertisement received by the department to be published in any local newspaper,” Naga claimed.

“Even the information provided by the office of deputy commissioner, Papum Pare, the office has not received any kind of order copy for NIT in newspaper by the ADC office,” Naga said, adding that the ADC’s order copy states that it had been forwarded for advertisement.

Naga said even the Sagalee BDO denied that any such scheme for the mini-secretariat had been implemented. The union also sought to know the whereabouts of the official quotation list.

“Why without any tax pay the entire work amount was given to M/s Home Decor? I even doubt the four firms that were awarded the work are his (Pertin) close relatives’,” Naga said.

He informed that a legal notice was served to the department concerned over the issue, a PIL was filed, and hearing was held five times.

“But due to lockdown, final hearing was halted. Therefore I appeal to the concerned department to cooperate to solve the case at the earliest for the public interest,” Naga said.