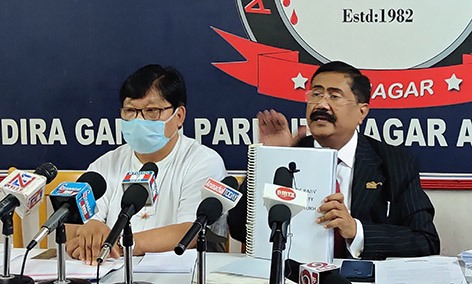 ‘Most of the students have already taken admission’

ITANAGAR, Sep 4: Rajiv Gandhi University (RGU) Registrar Prof T Riba said that “concessions in the admission fees of postgraduate, MPhil and undergraduate (UG) courses are not possible as most of the students have already taken their admissions.”

Addressing a press conference at the press club here on Friday, the registrar said, “If we make concessions for the remaining students, then we have to also give concession to all those students who have already taken admission. Therefore, the demand of concession will be a long process and is not possible.”

Responding to the eight-point demands of the Rajiv Gandhi University Students’ Union (RGUSU), the registrar said that the university will be refunding the exam fees collected through the online mode for semester examination, the process of which, he said, is underway.

Riba said that the demand for the extension of admission date for MPhil scholars was received very late, and that there is no hike in the admission fee as claimed by the union.

“During a discussion, we have found that there is no hike in admission fee and as per the data collected by respective departments, 80 percent of the admission has been completed,” he said, adding that by Thursday it had increased to 84 percent.

On the inclusion of a student union representative as a permanent member in the academic council meeting, Prof Riba said, “It is decided by the ministry of education, government of India. Therefore, we will look into the matter and see if there are any criteria to include a representative.”

Regarding the demand for conducting supplementary examinations for final semester students, Riba said that “the university cannot do that as there is the need for an academic council meeting and is approved in an executive council meeting.”

“The issue was earlier discussed with all principals of colleges and universities, wherein it was opposed by everyone. However, we will place the issue in the next academic council meeting,” he said.

He also informed that the students who have paid extra fees for the semester examination in 2019 will be refunded soon.

“The process to refund the extra fees paid by the students for non-practical subjects like sociology, history, commerce etc, is also underway,” he said.

RGU Vice Chancellor Prof Saket Kushwaha reiterated that there is no hike in the academic admission fees or in the examination fees as claimed by the RGUSU.

“A committee was formed to look into the demands of the students’ union and has found that the exam fee for the intermediate and last semester was not hiked but has rather been concentrated,” the VC said.

Regarding the demand for providing the particulars of the fees, he said, “Three years back, it was the then students’ union which said not to give particulars of fees during the admission for some reasons. We were just following the same order as passed to me.”

He also informed that the four-member committee is yet to take a final decision.

“I don’t know what the committee will decide upon. If the committee finds that there should be some discount, then we will have a thorough check and see where the discounts can be applied and issue a proper list, so that a discount can be given in the next semester as refunds are not possible,” the VC said.

He said normal academic session will resume by the first week of October and students will be called to attend classes following all the standard operating procedures of the ‘unlock’.

“The semester exams will be completed by 28 September,” Prof Kushwaha added.