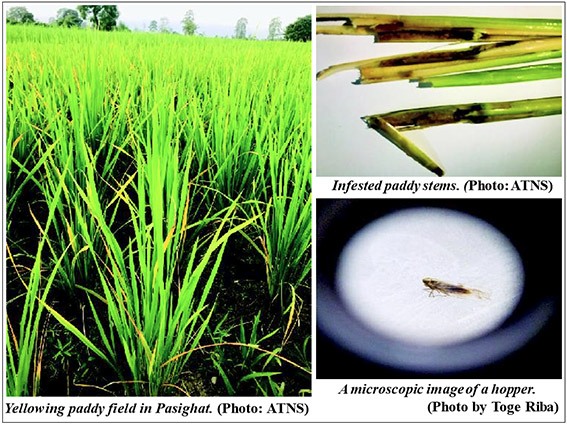 PASIGHAT, Sep 12: The paddy farmers of East Siang, Upper Siang, Siang and Lower Siang districts are facing uncertain times as wet rice cultivation (WRC) in East Siang has been infested by insect pests identified as the white-backed hopper, the brown plant hopper, the green leaf hopper and the spiny beetle.

More than half of the total area under WRC in East Siang has been infested by the white-backed plant hopper, the brown plant hopper and the green leafhopper because of rice tungro virus, leading to yellowing of standing crops.

In Upper Siang district, it has been reported that the rice hispa is predominantly causing the infestation.

Agriculture Secretary Bidol Tayeng said that it has gone beyond the economic threshold level of more than 50 percent, especially in East Siang and Siang districts, and suggested to the deputy commissioners to treat the remaining paddy chemically.

According to East Siang District Agriculture Officer Ajit Pao, of the total 6,920 hectares under WRC, 3,500 hectares have been affected. The damage assessment in Namsing in East Siang is being carried out.

According to East Siang Krishi Vigyan Kendra (KVK) officials, the first instance of the infestation was reported in the first week of August by a farmer in the JNC area in Pasighat.

The KVK’s plant protection scientist Toge Riba said that most of the paddy plants have been damaged by the white-backed plant hopper in East Siang.

He said though the hoppers have been seen before too, they were localized in small patches of the field, but this season there been a sudden multiplication, leading to quick spread and damage to the fields.

He said the weather has been congenial for the vectors due to the heavy rain and humidity during the transplantation period.

Experts say that infected paddy is not likely to recover, so the farmers should concentrate on paddy which is still unaffected. However, for many farmers, there is little to be done as entire fields have been damaged. Apart from using pesticides, the farmers have been advised to drain the water in order to disturb the breeding spaces, thereby suppressing the growth of the pest population.

Experts further say that organic insecticide like neem is not able to control the growth of the pests. Furthermore, the market does not have enough supply of the required pesticides and insecticides.

“So we are recommending whatever is available in the market,” Riba said.

Experts say that the economic impact will be huge in the affected districts as the infestation has already taken an epidemic form. They fear that even if the farmers are able to save some of the patches, the pests might come back during the maturity period, as had once been seen in Mirem village in East Siang.

“These are resilient pests,” Riba said.

According to the report sent to the agriculture directorate after a combined field survey carried out by the KVK, the College of Agriculture, the College of Horticulture & Forestry and the agriculture department in East Siang, “the incidence of case worm are common in most of the fields due to high rainfall and constant high-standing water in the rice field. Rice tungro virus is prominent in most of hopper complex infested fields.”

Pao in a report to the East Siang DC stated that pesticides and manually operated spraying equipment have been given to the farmers, and that additional procurements have been made but more need to be procured.

Meanwhile, the agriculture secretary has written to the deputy commissioners of the state to adopt insect pest control measures to save the state from a “famine-like situation.”

He wrote that the district agriculture officers of the affected districts may be instructed to make anticipatory expenditure for purchase of plant protection chemicals and equipment, without waiting for government sanction, within the earmarked budget provision.

The budgetary allocation for the entire state is Rs 50 lakhs.

“It has been reported that the damage is caused by insect vector, which may be white-backed hopper which transmits a virus causing tungro disease in paddy beyond the economic threshold level (ETL) of more that 50 percent, especially in East Siang and Siang districts. When the ETL is more than 50 percent, we need to go for chemical control measure, which is the last option. In Upper Siang district, it has been reported that rice hispa predominantly causes the infestation,” the secretary wrote in the letter.

He has asked officials to “rush immediately and examine the paddy fields, assess the damage and adopt control measures on a war footing to avoid a famine-like situation in the state.”

Even as the department is rushing now to control further damage, some farmers in Pasighat said that more could have been done by the department and the government.

One said that the yellowing had started soon after the paddy transplantation, and that there was enough time to control the spread.

One farmer said that the authorities were alerted at the end of July but they did not act on time. Only now officials from the department are visiting the areas, they said, adding that there is not enough institutional support.

The department denies the allegation.

Rice is grown organically in the Siang valley, but the farmers are panic-buying pest control chemicals, which are hard to find in the market now, to save the unaffected paddy.