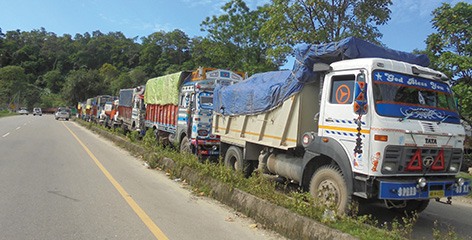 PASIGHAT, Sep 20: Traffic movement on the Pasighat-Yingkiong Trans-Arunachal Highway has been badly affected due to heavy landslides triggered by torrential rains.

Surface communication remains snapped for a week now due to road blocks caused by debris, stones and rocks, particularly between Bodak and Padu.

The highway department has been facing problems in clearing the road blocks due to heavy rain. However, its men and machines have been engaged in clearing the debris for the last couple of days. The department’s officials said it would take at least three days to clear the road.

Several goods trucks bound for Upper Siang district are stranded on the highway near Raneghat (Pasighat) as the highway authority is not allowing the vehicles to ply on the route due to the road blockages.

Earlier, in July also, landslides had snapped the road link between Pasighat and Yingkiong.