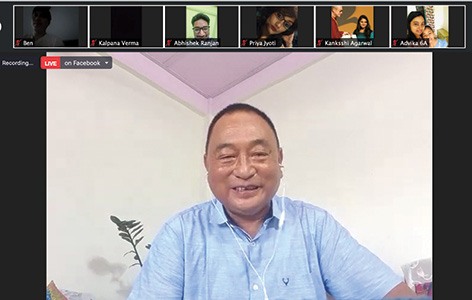 ITANAGAR, Sep 21: “The issue of menstruation benefits has to be seen with a larger lens of bridging the gender gap and removing hurdles which exist either due to biological reasons or due to societal biases,” said former union minister and Pasighat West MLA Ninong Ering during a webinar on ‘Policy and implementation challenges on menstrual health management’ on Monday.

The webinar was organized by Communeeti, a non-profit organization working on community-centric policymaking and implementation, in partnership with the Sommet Innovation and Research Foundation.

Ering, who had earlier introduced the private members’ menstruation benefits bill in the Lok Sabha, exhorted women to “break all glass ceilings and be ambitious and fearless.”

He spoke about breaking the taboo around menstruation and his experience of introducing the private members’ bill on menstruation benefits.

“Whenever a taboo is broken, something vitalizing happens,” Ering said. He also spoke about the history of affirmative action around menstruation in India and elsewhere, and called for making workplaces conducive for women.

The MLA spoke about how his legislative initiative on the issue led to attention by media, civil society organizations and businesses, and about his experience of working with women SHGs in his constituency and “the satisfaction which comes from enabling the economic empowerment of women.”

Bhagalpur (Bihar)-based Alharh Project’s founder Shalini Jha dwelt on her experiences of working at the grassroots level in Bihar and grappling with the “double crisis of the Covid-19 pandemic and floods.”

She stressed the need to accord top priority to menstrual health in policymaking, and the need for a systemic change. She also shared her thoughts on “the lack of representation of women

at the decision-making table, social marginalization, and layers of discrimination faced by women.”

Nadora Initiative founder Simran Gauba spoke about her experience of working around menstrual hygiene in the Delhi-NCR region amid the Covid-19 pandemic, and underlined the need for raising awareness on the issue.