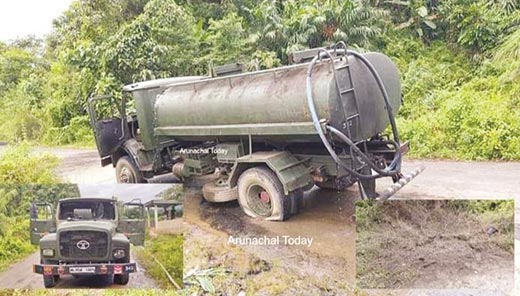 ITANAGAR, Oct 4: An Assam Rifles (AR) jawan, identified as Birendra Singh Yadav, was killed and another jawan was injured in an ambush laid by suspected ULFA (I) and NSCN (K) ultras near Tengmo village in Jairampur subdivision of Changlang district on Sunday.

Police sources in Changlang informed that the incident occurred at around 9 am, when suspected insurgents fired indiscriminately at a water tanker truck of the 19 AR near Tengmo village.

The injured jawan was immediately rushed to the hospital for treatment.

Changlang SP Mihin Gambo informed that a joint search operation is being launched in the area to nab the perpetrators.

Terming the incident “an inhuman act by the insurgents,” Nampong MLA Laisam Simai strongly urged the insurgent groups to stop violence “as it not only takes lives but also disturbs peace in the region and affects the local people’s lives.”

The MLA offered heartfelt condolences to the bereaved family of the martyred jawan, Birendra Singh Yadav of Uttar Pradesh, following his supreme sacrifice.

In a press release, the forum said such heinous acts weaken the resolve to establish peace and normalcy in Changlang district and the TCL region as a whole.

“We condemn such an act of violence in its strongest term and will not encourage anyone whosoever may intend to sabotage the peace process. The incident is an inhumane and unfortunate,” the TCLPeF said.

It said the Indo-Naga peace talk is “progressing very smoothly and nearing the final stage,” adding that the public are desperately anticipating an early solution through the protracted Indo-Naga political talks to bring permanent and lasting peace in the TCL region.

“We fervently appeal to every stakeholder to restrain from acts of violence in the soil of Tirap, Changlang and Longding districts as peace is a prerequisite in achieving early solution to the decade old Indo-Naga political deadlock. We don’t want any more confrontation and bloodshed in our TCL area,” it said.