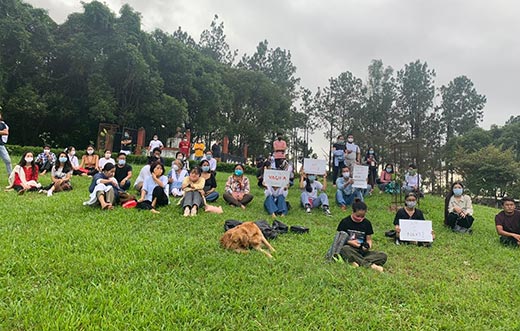 ITANAGAR, Oct 4: Condemning the gangrape that occurred in Hathras in Uttar Pradesh, a sizeable number of youths and senior citizens staged a protest at IG Park here on Sunday.

The sit-in protest was organized by the Concerned Arunachal Citizens through social media platforms. Youths and senior citizens from all walks of life took part in the protest and demanded justice for the gangrape victim, Manisha Valmiki.

“If we want to see India grow in the 21st century at world level, we need to end Hindu casteism. We need to stop atrocities and deprivation against Dalits and minorities,” said renowned social activist Jarjum Ete, who also took part in the protest.

Ete claimed that numerous cases of sexual violation have been reported from schools in Arunachal but they never come to the authority’s notice.

“There have been innumerable sexual violations and violence against children in the schools. Many parents are actually silenced by the school management, the local community and the district administration,” said Ete, and urged the State Commission for Protection of Child Rights to mobilize support for children’s rights in the state.

She called upon young Arunachalees to raise their voice against “casteist violence, sexual exploitation of children, domestic violence, and gender violence.”

Researcher, writer and activist Ngurang Reena said, “The use of rape as a tool of oppression and control in caste-race atrocities is pervasive. Upper caste men violate women’s bodies to ‘teach them a lesson’. This constant sexualization of women’s bodies, especially (of women) from the marginalized communities, such as Dalits, tribals, Adivasis and other religious minorities, is a reality and needs to be condemned.”

“Association of women’s bodies with war and violence is an old phenomenon and the recent sexual assault and death of the Dalit woman in UP’s Hathras is a reminder of the state of women’s position in our society,” Reena said.

“Women continue to exist as a secondary gender in today’s India, and our social identities determine our political rights. I call out the prevalent sexual violence; I am calling out caste-based violence; I am calling out patriarchy that celebrates violence. And women’s rights are dismal in Arunachal Pradesh, as well. Gender-based violence and sexual violence on women here needs to be called out, as well,” Reena added.

She also called out the state’s police department over its “incompetence” in probing the mysterious death of her father, Ngurang Pinch, in 2017.

Prof Nani Bath said, “We should care for the safety of our daughters by teaching self-defence techniques.” He also urged the government to fast-track women- and children-related cases in the state.

Taking part in the protest, a young boy, Marpi Nyodu said that the notion that only women are supposed to take up women’s issues is very wrong.

“We need to come together to amplify our voices, because we all are humans first. Stop discriminating against people on the basis of gender; stand up for each other. It is our right to speak up for everyone,” Nyodu said.