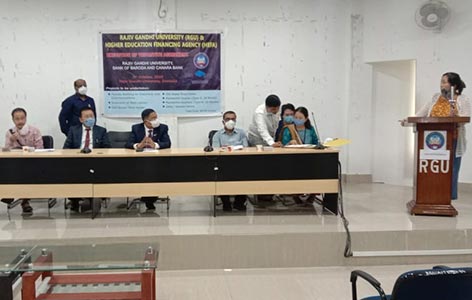 RONO HILLS, Oct 5: A tripartite agreement on Higher Education Financing Agency (HEFA) was executed on Monday at Rajiv Gandhi University (RGU), with RGU, Canara Bank and the Bank of Baroda signing a memorandum of understanding (MoU) for sanctioning of loan for infrastructure development.

“As per the agreement, Rs 66.59 crore has been sanctioned by the HEFA for various construction projects in the university,” RGU Finance Officer Prof Otem Padung informed.

Under the agreement, the construction of the faculty building for the electronic & communication department, extension of the main library, 200-bedded hostels (one each for boys and girls), residential quarters, and a utility/service centre will be undertaken.

RGU Vice Chancellor Prof Saket Kushwaha informed that “the UGC no longer issues funds for the construction of buildings to central universities.”

“Under the new rule, the HEFA was constituted to give loans to universities for construction purposes, which have to be repaid by the university. The loan is sanctioned only for projects which involve revenue generation,” he said.

He also explained that “this was done to bring parity between fund distribution among the old and well-established universities and universities which are in the need of funding, as they are lagging in infrastructure development.”

The loan was sanctioned by the HEFA under the third window/clause of the agreement, under which the university will need to pay only the interest on the loan amount after the completion of the project.

The VC expressed hope that this would be the first step towards the start of many such projects for the infrastructure development of the university.

Registrar Dr NT Rikam said that “the first hurdle was crossed by the RGU team by getting the loan approved.

“The next and even greater challenge would be to maintain the quality of work to be done at par with the national standards. To achieve this, it is essential for every member of the university to take this responsibility in whatever capacity possible to ensure that the best work possible is achieved. Only then can the face of the university be changed,” he said.