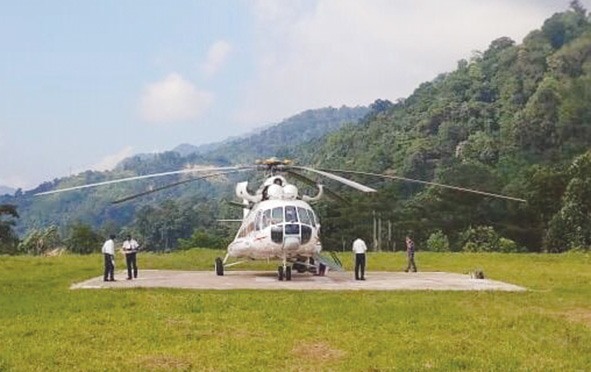 ITANAGAR, Oct 12: A Guwahati bound Skyone MI-172 helicopter made an emergency landing in Bhutan on Monday after the pilot noticed a fire warning signal just after it took off from Tawang.

Skyone Airways operation commander, captain Pankaj Vishnoi informed The Arunachal Times over the phone from New Delhi that the incident occurred when the chopper was flying over Bhutan valley.

Captain Vishnoi informed that the chopper lifted off from Tawang at around 12:13 pm with 14 passengers and five crew members on board. He said the audio warning signal of fire coming from the auxiliary power unit (APU) was spotted by the captain in command (pilot) Anand Malik and immediately a fire extinguisher was discharged into the APU compartment.

Captain Vishnoi said that the incident occurred midair near the India-Bhutan border, while Guwahati was still 30-35 minutes away.

“Thereafter, the fire warning light in the cockpit went off, and as per the emergency checklist, the pilot is supposed to land at the earliest possible. Guwahati was still 30-35 minutes away. There is a helipad in Nganglam in Bhutan, at an aerial distance of four kilometres from the Indian border. The captain decided to land for the safety of the passengers and the crew members,” said captain Vishnoi.

“After landing, they did not find any indication of fire. They visually inspected the helicopter. This precautionary landing was of course because, sitting in the cockpit, you do not know the actual condition of the aircraft; so the captain decided for precautionary landing,” he added.

Caption Vishnoi further informed that a Skyone team is on the way to the spot (Bhutan). He said the team would be reaching the helicopter on Tuesday and replace its fire extinguisher and some components.

Captain Vishnoi expressed hope that the Skyone team would be able to fly back the chopper and resume passenger service by Wednesday.

On being contacted, Civil Aviation Secretary Swapnil M Naik said, “Landing was normal with no injuries or damage. Passengers and crew are brought to Guwahati by road with help of Bhutan authorities and SSB and our DRC in Guwahati. Tomorrow, technical team will go and check the helicopter and repair. It will be brought to Guwahati.”

Sources informed that, with the help of the air traffic control (ATC) at the Paro (Bhutan) airport, the pilot made an emergency landing at the helipad in Nganglam. It is learnt that the ATC in Paro and the Royal Bhutan Army extended help and escorted all the passengers and crew members safely to the Indo-Bhutan border. They were later shifted to Guwahati by a special vehicle provided by the DRC in Guwahati.

Captain Vishnoi ruled out any possibility of the incident affecting Skyone Airways, which is on the verge of winning an MHA-subsidized contract for passenger helicopter service.

“I don’t consider it as a setback. After all, a helicopter is a machine. Technical snags do occur at times. In this particular case, the warning light has come. The automatic fire system has operated. Thereafter, the crew members decided to land the helicopter, ensuring the safety of the passengers,” he said.

“It was not a very major thing, that fire in the engine. We have been operating in Arunachal for the last five-six years. We have an absolutely clean record, maintenance practices are upto the standards, and the flight crew is very experienced,” captain Vishnoi added.