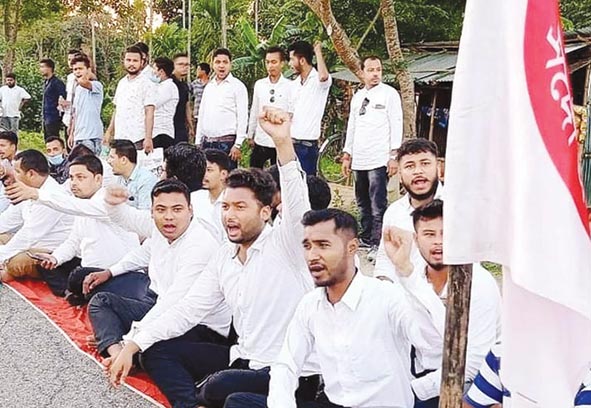 GOGAMUKH, Oct 19: Several activists of the Asom Jatiyatabadi Yuba Chatra Parishad (AJYCP) and the All Assam Students’ Union (AASU) are staging a protest here to stop transportation of machineries and construction materials to the ongoing Subansiri lower hydroelectric project (SLHP) in Gerukamukh.

The agitators have decided to impose a three-day blockade on the road to register their protest.

AJYCP and AASU leaders alleged that trucks loaded with construction materials have been moved to the NHPC site, taking advantage of the Kati Bihu festivities in Assam.

The agitators said they were compelled to take to the streets against the controversial mega dam project, which is being constructed by the NHPC in Gerukamukh on the Assam-Arunachal boundary.

In July this year, the AJYCP had blocked the movement of trucks carrying construction materials during the Covid-19 lockdown, ignoring the widespread protests continuously initiated by a number of anti-dam organizations.

A tense situation followed the protest after the administration clamped curfew to disperse the agitators.

The stranded trucks loaded with construction materials were later ferried to the NHPC project site with the help of security forces.

The construction of the mega dam had been halted since November 2011, but the authority supplied machineries to the project site.

The overall situation in Gogamukh is reported to be peaceful.