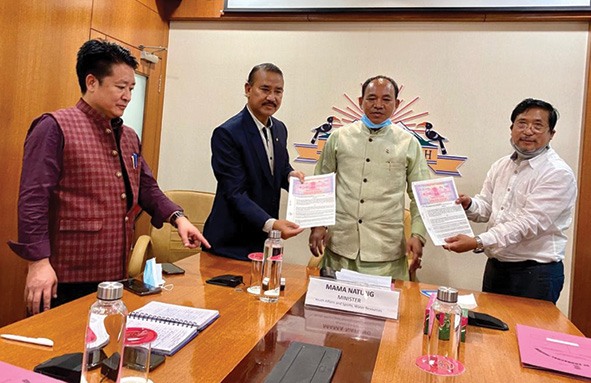 ITANAGAR, Oct 27: The sports department on Tuesday inked a memorandum of understanding (MoU) with the Sports Authority of India (SAI) to establish a national centre of excellence (NCoE) at the Sangay Lhaden Sports Academy (SLSA) in Chimpu for boxing, Wushu and weightlifting.

“With this MoU, the NCoE will be given full shape. I congratulate the team, especially Youth Affairs and Sports Minister Mama Natung and his department,” Rijiju said.

He asserted that the NCoE would provide world-class infrastructure and training to sportspersons, and expressed hope that Arunachal would soon produce excellent sportspersons who would make the country proud on international stages.

Rijiju also said that more disciplines, besides boxing, Wushu and weightlifting, could be added in the NCoE after the infrastructure is fully developed. He asked the sports department to resolve the matter of land acquisition for shifting the NCoE to its permanent site in Rakap, Jote at the earliest.

Natung expressed gratitude to Rijiju for making the MoU possible.

“With this, we are very much optimistic about winning medals in the 2028 Olympics and beyond,” Natung said, adding that the admission procedure for the abovementioned sports disciplines has already been completed.

The minister informed that the required sports equipment, kits, furniture, etc, are in place. He informed that the existing infrastructure of the SLSA would be used for day-to-day training activities, “including accommodation, in order to set up the permanent structure within the campus of SLSA.”

Highlighting the importance of the MoU, SAI Director General Dr Subash Pradhan said that the signing of the MoU “is to bring world-class infrastructures to NCoE.”