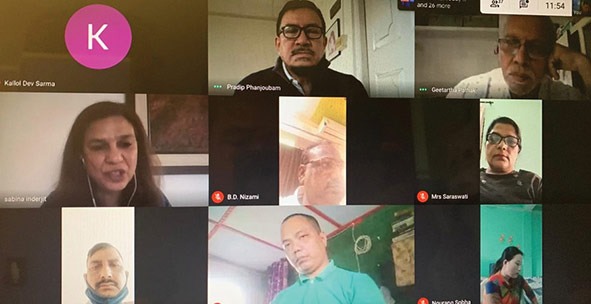 ITANAGAR, Nov 3: The Indian Journalists Union (IJU) has assessed the situation of the impact of Covid-19 on media in India through the International Federation Journalists (IFJ) project in five states, namely, Arunachal, Assam, Sikkim, Kerala and Chhattisgarh.

The IJU conducted a survey to assess the ground reality of media organizations, especially after the global pandemic. This was followed by a webinar, which was attended by various members from across the country who shared their experiences during and after the Covid lockdown.

Presiding over the webinar, IJU president Geetharta Pathak said, “The role of the press is now to assert our rights; we need information to give the people. We need to strengthen our union; as a journalist community we need to fight for our rights.” He informed that the central government has curtailed free press and right to inform, taking advantage of the pandemic situation.

“Above all, the national government, they are trying to push their own agenda by curbing the right to free press. Right to free information is also being curtailed.

Covid crisis (is being) used as a smokescreen to hide how much money have been collected and spent in PMRF,” Pathak said, and urged the journalists to assert their right to free press.

IJU secretary-general Sabina Inderjit informed that the IFJ project has helped the IJU to understand the issues being faced by the media in India, especially in the five states. She also informed that, according to survey, most of the participants believed in the union and also felt that the union must stand united.

Inderjit said there have been various cases in which the state governments have used the sedition law to counter journalists from reporting the truth.

“This has created a fear psychosis among the journalists and forced them to go soft and deviate from the main issues. If we are not able to create informed public opinion, our democracy is in danger,” said Inderjit, and urged the members to stand for professionalism.

Speaking as resource person, renowned journalist and author from Manipur, Pradip Phanjoubam observed that the impact of the pandemic could be seen in the unprecedented migration of readership and business from traditional media to the internet.

“In the long run, there is no much future for print edition of newspapers. There is so much of migration of readership and business as it is so interactive,” Phanjoubam said.

On the impact of the pandemic on quality journalism, Phanjoubam stated said “there is a change of attitude in the governments, and the subsequent reduction of advertisements has forced the media owners as well as journalists to compromise on issues which are bad but difficult to prevent it.”

“Lots of people are compromising on journalism, trying to be on the right side of politics to get the right kind of advertisements. The important thing for us is to draw the line. You cannot be a martyr. Without being a martyr, you can keep your integrity – that line needs to be drawn,” Phanjoubam said.

On social media, Phanboujam said, “The social media information is not screened and verified one. That’s why traditional media has more credibility than social media.”