MUMBAI, Nov 5: The Committee on Public Undertakings (COPU) of the 7th legislative assembly of Arunachal grilled the managing director (MD) of the Arunachal Pradesh Industrial Development Financial Corporation (APIDFC) over the dilapidated condition of the Arunachal Bhavan in Navi Mumbai. 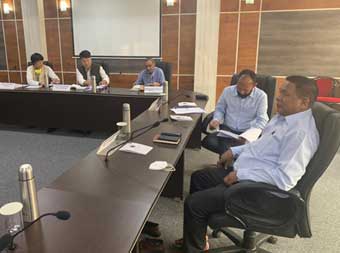 Seeking a detailed report on the status of the Arunachal Bhavan, Mithi asked the APIDFC MD to submit a report on whether the Rs 10 crore upfront money which had been paid to the APIDFC by private builder M/s US Roof had been deposited in the state exchequer or not.

Mithi sought the expenditure details of the upfront money and the terms of agreement between M/s US Roof and the APIDFC. He asked the APIDFC to submit it in writing by January 2021. He also sought to know if US Roof had mortgaged the building to any bank as loan component.

“It is the prime responsibility of the APIDFC to work out the modalities. More than 30 years, our people are deprived of accommodation facility, that too in commercial capital of India,” said Mithi.

“We found out that the government is not taking responsibility in delegating any authority to the bhavan. It is our collective responsibility to ascertain, as this discussion is for the welfare of the people of Arunachal Pradesh and also those of the students in Mumbai,” Mithi observed.

Raja asked the APIDFC to provide all the details in the next meeting. He also sought to know on what grounds the special investigation cell is investigating the issue.

Wangnaw questioned how the land allotted to the government of Arunachal for constructing an emporium and a guest house turned into a private business centre. He suggested that the legal battle with the City Industrial & Development Corporation (CIDCO) of Mumbai be resolved before adopting any decision.

What led the APIDFC to lease out a prime asset of the state in the commercial capital of India on a 60-year agreement with US Roof? The COPU demanded a reply from the APIDFC in writing.

The COPU members resolved to drop the ‘notional earning’, as flagged in paragraph 5.3 of the CAG’s report, considering that the eight rooms allotted to the Arunachal government “hasn’t started well.” The COPU members sought a commitment from the GA secretary that the order of taking over by the DRC Delhi would be notified by January. To this, Deori assured that the notification would be issued by early January next year.

Responding to the queries from the COPU members, APIDFC MD Hage Tari highlighted the background of the fiasco which led to the signing of the 60-year lease agreement with US Roof, and the fallout of the legal battle. He gave assurance that he would submit a detailed report and documents in the next sitting.

It is learnt that US Roof has slapped an amount of Rs 1.92 crore as maintenance bill, electricity bill, etc, on the APIDFC for payment.

In 1994, the CIDCO of Mumbai allotted a plot of land measuring 2,331 sq mtrs in Sector 30 A in Vashi, Navi Mumbai, to Arunachal’s industries department for constructing the state guest house-cum-sales emporium. After three years, a lease agreement was executed between the CIDCO and the industries directorate in August 1997.

The state government decided to float a tender to allow a private builder to develop the guest house-cum-emporium. The work was awarded to M/s US Roofs Ltd on the condition that the developer would provide eight rooms, including office and emporium, to the Arunachal government and also pay Rs 10 crore non-refundable upfront money within 15 days. The 60-year lease agreement with M/s US Roofs Ltd was signed on 12 October, 2007.

The developer rented out 14,000 sq ft (one-third of the whole space) to the jewellery chain, Kalyan Jewellers. The business establishment’s name has prominently overshadowed the guest house-cum-emporium, thus violating Clause 25 of the lease agreement, where it is clearly mentioned that “the premises measuring 6,500 sq ft being the owners’ allocation shall be called as Arunachal Pradesh state guest house or such other names as the owners may deem fit, necessary, proper and said name shall be displayed in prominent places.”