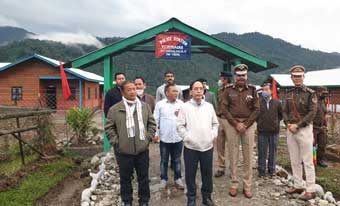 The home minister reiterated that the people should view the police station as a “seva kendra (service centre)” for the masses.

“The state government, led by Chief Minister Pema Khandu and Deputy CM Chowna Mein, is focusing on all-round development of the state and the establishment of the police station is one of such developmental activities,” Felix said.

He also said that he would direct the executing agency to speed up the road construction activities in the area.

“Fund of around Rs 50 crore has arrived in the police department for Tirap, Changlang and Longding region, which will be transferred to the RWD. I am hopeful that all the works will be completed while maintaining quality,” Felix said.

He also announced that he would provide Rs 2 crore for the construction of a community hall and a playground in Vijoynagar and Gandhigram.

Joining Felix, UD Minister and local MLA Kamlung Mossang stressed on the importance of transport and communication for development.

DGP RP Upadhyaya informed that all the executing agencies of the police department have created 10 major projects in the last one year, which include police stations and fire stations in different parts of the state.

He thanked the people for their continued support to the APP and encouraged the youths to prepare for recruitment for over 100 posts of sub-inspectors and over 1,000 posts of constables in the APP.